Asghar Farhadi: My heroines inspire the movement and change in my films

If I want to make films in Iran, I have to accept the censorship.

The film director twice awarded at Cannes for his drama The Salesman, returns to the subject of the dominant role of women in his films and clarifies his position regarding censorship in Iran.
Winner of the best screenplay and best actor awards, The Salesman, the new film of Asghar Farhadi presents a fascinating thriller, where the director of “A Separation” scrutinizes a couple in crisis. Visiting Paris, he who learned the ropes with Abbas Kiarostami has entered into the spirit of the game of the interview. At times unsettled by references that were too western, the director answers frankly and clarifies his position as a filmmaker working in Iran.

Delcroix: Throughout the film, you stage a couple of players repeating Arthur Miller’s piece Death of a Salesman in Tehran, with all the constraints implicating the government of Iran.
Farhadi. I grew up in those conditions in Iran. For you, they can appear somber. But when you grow up in such an environment, with the means that this environment gives you, you do not pay attention. It is like someone who lives in a certain climate and no longer asks himself how his life would be if it were warmer or colder. Me, I make films, taking into account my climate. At any rate, staging the piece inside my film has nothing to do with wanting to pity my fate. Nor about my work conditions as an Iranian filmmaker. These restrictions do not concern the audience of my film. The only thing that the audience needs to be concerned with is my film. 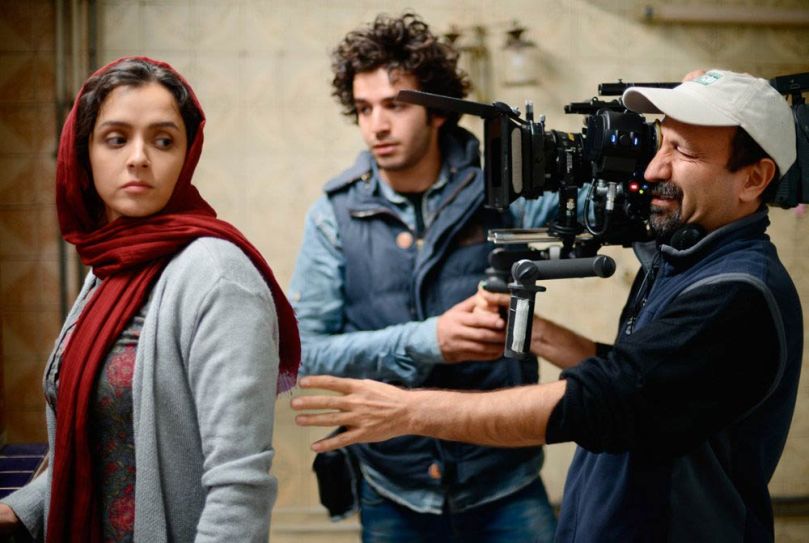 Delcroix: Could one say that the heroines of your films are more complex and more mysterious than your heroes?
Farhadi: In reality, when I start writing the story I do not establish distinctions among the female and male characters. I write and see them first as human beings, without the distinction of gender. Their gender and sex are not decisive in their coming into being, or in the manner in which I build or develop them. Even so, I have to admit with hindsight that my female characters appear much stronger than the male characters. My heroines are determined. They are the ones who inspire the movement and change in my films. They are also more courageous than the men. If I had to analyze that, to try to know where this comes from, I would say that the women in my life or those who surround me in my country are like that.
Delcroix: Where is the origin of this dark vision of the couple?
Farhadi: I don’t think I have a dark view of the couple. On the contrary, I give great importance to it. It is just a way of tackling a question that seems to me fundamental and inexhaustible. Also, married life is important in my personal life. This subject is an endless subject. It is because of this reason that I dedicate myself to studying and exploring it and pushing it into crisis.

Delcroix: Seeing The Salesman, one tends to believe that the best way of making cinema consists of playing with the ellipse, circumvention, and suggestion. It is not what Jafar Panahi does…
Farhadi: As far as I am concerned, I have no choice. If I want to make films in Iran, I have to accept the censorship. If I have had not done that, I would not have done movies, and we would not be having this conversation about my film today. To remove the ambiguity about Jafar Panahi, I believe filmmakers are all different. They each have their manner of functioning. On this subject, I often make reference to Abbas Kiarostami. As I worked as an assistant to him; during the most difficult years of the Iranian censorship, Kiarostami continued to work. He never complained about the fate he was given. I prefer walking in his footsteps rather than Jafar Panahi’s.