The Book of Kings on the Cyber

Ferdowsi's narration of Persian history, a mix of mythological figures and real historical characters became the identity of Iranian nation for centuries

No book in Persian history has been more inspiring and culturally popular than Shahnameh- The Book of Kings. 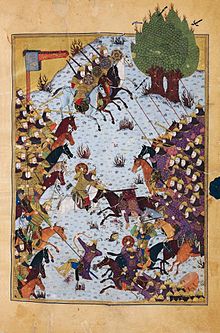 Abulghasem Ferdowsi, great Iranian poet (935-1020) captured tales of Iranian history from the dawn of time to seventh century A.D. Ferdowsi accomplished what a few other Persian literary figures before him had attempted incompletely. It took Ferdowsi 30 years (977 t0 1010) to complete The Book of Kings. It is the world’s longest epic in verse. His narration of Persian history, a mix of mythological figures and real historical characters became the identity of Iranian nation for centuries. Shahnameh heroes and their battles against evil forces, their glorious victories and their tragic losses, symbolized real life resistance of Iranians against both military and cultural invasions from abroad.

Shahnameh contains an era of more than fifty monarchs in 50,000 verses. The text begins with the first legendary Persian king and ends with the fall of the Sassanian Empire to the Arabs in the middle of the 7th century. Ferdowsi composed Shahnameh in modern Persian from some resources in Middle Pahlavi Persian. The Book of Kings created a narrative resource for many writers, poets, play writes, historians, linguists, filmmakers and artists for centuries. The pictorial account of its stories inspired artists to illustrate them and turned to be the dominant theme of Persian miniature paintings. 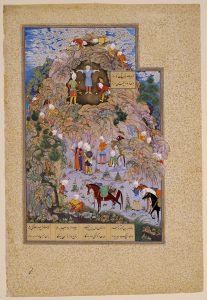 All copies of Shahnameh and all paintings are unique in their entirety. Hundreds, if not thousands, of illustrated copies of the Shahnameh, survive today in collections worldwide.

Princeton University in New Jersey owns five illustrated versions of the Shahnama, one of which, the Peck Shahnameh, named after its donor, ranks among the finest 16th-century versions in the US, due to its impressive size and the quality of its materials and decoration.

The scribe Qiwām ibn Muḥammad of Shīrāz prepared the manuscript. The date 998 H, which he provides, corresponds to 1589/90 AD. On stylistic grounds, the paintings are also localizable to Shīrāz, an important center of manuscript production in southwestern Iran. The Peck Shahnameh has 475 paper folios and a full painting cycle of 45 full-page miniatures spread throughout the text, as well as double-page miniatures at the beginning, middle, and end of the manuscript. The miniatures are of high quality and substantial size, measuring 47.0 × 32.5 cm. The manuscript has had a distinguished provenance.

Princeton’s Great Persian Book of Kings – was on view at the Princeton University Art Museum from October 3 through January 24, 2016. The exhibition featured all of the manuscript’s 48 illustrated and illuminated folios and introduced the captivating splendor and art-historical significance of the Peck Shahnameh to the public for the first time.

The Peck Shahnameh was illustrated in 1589-1590 in the city of Shiraz in south-central Iran and is an exceptional example of the manuscripts created in that center of learning and culture.

Every intricate detail, from the gold-specked paper to the number and content of the illustrated scenes, was conceived in advance by a master book designer.
Marianna Shreve Simpson curated the exhibition, a specialist in the Islamic arts of the book, who was previously curator of Islamic Near Eastern art at the Freer Gallery of Art and Arthur M. Sackler Gallery, Smithsonian Institution, and director of curatorial affairs and curator of Islamic art at the Walters Art Museum, Baltimore.

During the exhibition, a digital presentation of some folios was masterfully developed by Dalma Foldesi using Hype App and the Adobe Cloud software. Juliana Ochs Dweck, Mellon Curator of Academic Engagement, Marianna Shreve Simpson, guest curator, and Daniel Kearns, broadcast engineer at Princeton University (and narrator of the introduction), contributed to this project. Three pieces of music by Sufi musician Amir Vahab were used as the background music.

→ See the whole digital recreation of The Book of Kings.

"Until we leave this plain of sin and pride..." Attar's Conference of the Birds
Asghar Farhadi: My heroines inspire the movement and change in my films
Tehran Taboo: On Hypocrisy and Truth
Tagged with → Esfandiar • Ferdowsi • Persian Literature • Persian Miniature Painting • Rostam • Shahnameh • Sohrab
Share →
Tweet