Abadan, The Rise and Demise of an Oil Metropolis

Writer: Kaveh Ehsani and Rasmus Christian Elling
The image of Abadan as a vanguard city of oil-driven modernity was transformed by its role in the 1979 revolution and then shattered by the war that followed 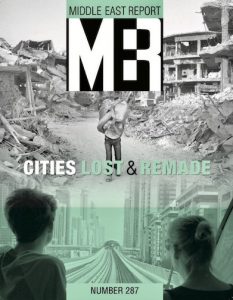 In its summer 2018 issue (287), Middle East Report published articles on the sources of displacement, dispossession, and loss found throughout urban areas in the contemporary Middle East, which often produce the very population outflows that militarized border zones seek to contain.
In his editorial remarks, Middle East Report Editor Steve Niva explains: “how in our age of “planetary urbanization” many cities have become battlegrounds where insurgents seek asymmetrical advantage against opponents who increasingly target cities as if civilians no longer exist—the way Israel labels the entire urban fabric of Gazan society a “terrorist infrastructure” or the urban destruction campaigns undertaken by Syria, Turkey, Saudi Arabia, and the US against ISIS. At the same time, global capitalist deregulation and privatization have given rise to what global sociologist Saskia Sassen terms “predatory formations” of investors, states and economic elites that target cities for speculative profit and nepotistic rewards, emptying them of their poor or rebellious inhabitants, whether in Amman, Istanbul or Morocco. Some urban inhabitants are forced to flee while others resist, remain and keep alive more just visions of their collective urban past and future whether in Gezi Park, Mosul or elsewhere.”
Amman, Alexandria, Dubai, Jerusalem, Mosul, Sur, Rabat and Abadan are among the subjects of this valuable review.
With the permission from MERIP, we are publishing excerpts from “Abadan, The Rise and Demise of An Oil Metropolis” by Kaveh Ehsani and Rasmus Christian Elling.

The story of Abadan is entwined with the turbulent histories of modernity in Iran, the Persian Gulf and the Middle East. From its foundation on a sandy island in the Shatt al-‘Arab River bordering Iran and Iraq on the eve of World War I, the city has been at the center of momentous events of global significance, shaped by imperialism, nation building and power struggles over oil.
Middle East oil was first discovered in 1908 in the Zagros mountains of southwest Iran. The British government became the majority shareholder in the Anglo–Persian Oil Company (APOC, today BP) in violation of the concession granted in 1901 by Mozaffar ad-Din Shah to an Australian businessman. The decision to build a major refinery in Abadan to supply Britain’s war machine was made on the eve of World War I. While the industrial infrastructure was still being assembled, APOC attempted in vain to control and manage a growing population of migrants and refugees, as did the Iranian government in its later effort to impose control over the city. Abadan’s vast industrial workforce was made up of expatriate Europeans, Indian migrants recruited from outposts of the British Empire, dispossessed and proletarianized Bakhtiyari and Arab tribesmen and Iranians coming from as far as the oil fields of the Caucasus after the Russian Revolution of 1917.
The urban politics of Abadan was thereafter shaped by relentless struggles over the right to the city—of living and working conditions and management of social and political life—between the oil company in its various permutations; the autocratic central government; and the growing population developing novel forms of collective resistance and advancing its own claims and demands. Workers in the refinery, port, railways and factories were under constant surveillance and control by employers, but they found support among the general population of the city for their attempts to address social and political concerns.
These entanglements made Abadan synonymous with oil and all the violent paradoxes and revolutionary transformations associated with it. The establishment of the massive complex of oil extraction and refining in southwest Iran was based on the forcible dispossession of local tribal and agrarian populations, but it also led to the emergence of new urban solidarities among destitute migrants living in the slums of the new oil cities. This new urban geography of oil was characterized by shocking disparities of wealth despite monumental infrastructure development that spurred new models of urban management elsewhere in the country. The oil complex created tremendous pollution and ecological degradation, but this was juxtaposed to manicured European garden-city neighborhoods, segregated social clubs and modern amenities like hospitals, schools and workers’ housing estates. 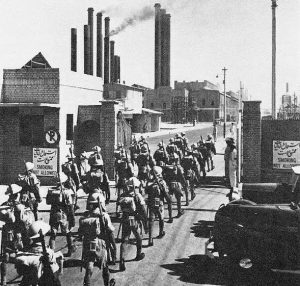 Oil cities like Abadan suffered from heavy-handed corporate rule and constant police-state surveillance and repression, but they also became sites of labor activism, radical politics, and grassroots popular movements. Although highly segregated by class, race and occupation, ethnic and cultural intermingling along with the industrial labor market and urban economy created a cosmopolitan environment where new solidarities emerged to resist discrimination and injustice. By the 1960s new technologies, urban planning practices and consumer products entered Iran through Abadan, with the city giving rise to innovations in fashion, lifestyle and popular culture. Through films, newspapers and posters, the Pahlavi state produced an official image of Abadan as the epitome of Fordist development, where hardworking families could enjoy prosperity and suburban comfort in the shadow of the oil complex.
Revolution, War and the Aftermath 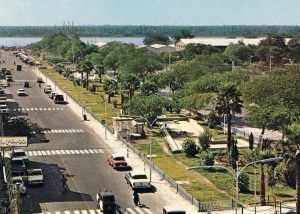 The image of Abadan as a vanguard city of oil-driven modernity was transformed by its role in the 1979 revolution and then shattered by the war that followed. Although the Iranian oil industry had been nominally nationalized in 1953, logistic and technical operations remained under the effective control of multinationals. In late summer and autumn of 1978, Iranian oil workers joined the popular call for a mass strike and effectively shut down operations across the sector. The strikers’ main political demands were the full nationalization of the oil industry and the expulsion of all multinational oil companies and the thousands of expatriates who held key positions in technical, managerial and industrial operations. The strike dealt a fatal symbolic and economic blow to the monarchy.
The city’s destruction in the aftermath of the Iraqi invasion and the scattering of its population were part of a major political turning point that allowed the Islamic Republic to consolidate its monopoly over post-revolution politics in Iran. Like most of Iran’s war-damaged western frontier, Abadan’s commercial economy and its industrial heart—the harbor, oil refinery, steel mill and petrochemical plant—were never fully rebuilt after the 1988 ceasefire, in part due to the lack of a permanent peace treaty with Iraq. The main hubs of the Iranian oil industry moved elsewhere, and the once vibrant river commerce that had sustained major ports in Khorramshahr, Abadan and Basra in Iraq is today all but moribund.
Moreover, ill-conceived and poorly executed development projects, including massive dams, sugarcane agribusinesses and water transfer schemes, have caused critical water shortages and pollution throughout the Khuzestan Province. The reservoir of the Gotvand dam on the Karun river, for example, has salt deposits that have spoiled the country’s largest river and main source of drinking water for Abadan, Ahvaz and Khorramshahr. In June 2018, Khuzestan’s representative in the Provincial Higher Council warned of the catastrophic consequences of the province’s water situation by stating that “Karun has become a flowing sewer.” A Majlis representative from Bushehr warned of possible water wars, saying that “our society is on the verge of disintegration.” Significant regional environmental chemical contamination caused by three major wars has further exacerbated the situation.
The damming and indiscriminate diversion of upstream rivers by all riparian countries—Turkey, Iran, Iraq and Syria—has led to the catastrophic draining of the vast marshlands of southern Iraq and Iran. The resulting desertification has led to widespread displacement of populations and recurring dust storms that appear apocalyptic in scale and intensity. The critical state of air quality caused by salt, dust and harmful chemicals has caused the frequent closing of schools, offices and power plants. The poor air quality is also blamed for the rise of chronic health problems in Abadan. Global warming has further exacerbated the crisis, with temperatures rising as high as 130°F. Some climate scientists warn that average temperatures may rise to levels that make the entire Persian Gulf uninhabitable.
Amidst these dire circumstances, displaced people who returned after the war to rebuild Abadan barely hang on in a dispiriting atmosphere of neglect and discontent. Even the establishment of the Arvand Free Zone, a large-scale industrial and commercial enclave aimed at reviving the moribund local economy, has failed to generate the kind of progress envisioned in official promotional material. Following the 2015 Iran nuclear accord, Petroleum Minister Bijan Namdar Zageneh promised that the lifting of international sanctions would finally reverse the decline of Abadan and Khuzestan by ushering in new capital investments. His predictions have proven hollow, as the city and the oil rich province have continued down the spiral of decline and despair.