Molla, Laughter, and the Constitution

Managing to speak to the intelligentsia and the masses, Molla Nasreddin was an instant success and would become the most influential and perhaps first publication of its kind to be read across the Muslim world, from Morocco to India

Iran’s constitutional revolutionary movement attracted many writers, poets, and artists and gave them the opportunity to fight the tyranny of the Qajar court, the colonial powers, and the hypocrisy of the country’s Muslim clergy.
Before the revolution, after the assassination of Nasseralddin Shah and during the reign of Mozaffaralddin Shah, some journals and newspapers had prepared the public opinion through reporting on world affairs, human rights, freedom of expression and the rights of citizens in their relationships. In addition to papers published in Tehran, there were a number of publications in Tabriz, Bushehr, Rasht, and Isfahan.
During the 10-year reign of Mozaffaralddin Shah, there were also a good number of underground papers that promoted democracy while revealing atrocities of the Qajar court, corruptions, dealings with the colonial powers and encouraging the public on protests, strikes, and even guerilla fighting against the government.
Naturally, under revolutionary turmoil, the Qajar government had maintained tight control over most printing and publishing facilities. Hardly any new and substantial book was printed during the first two years of the revolutionary movement. Fluid social and political conditions, the firm control over the printing facilities and printing paper supplies, forced innovative writers to utilize journalism as the most suitable medium of the moment.
Newspapers and magazines, with limited runs and ease of distribution, became the modern means of information dissemination. Journalism, a new phenomenon in the Middle Eastern societies, became the medium to propagate democratic ideas, criticize the court, scorn the elite, and provide news from other parts of the world, especially Europe.
Immediately after the Constitutional decree in August of 1906 which turned Iran into the first parliamentary government in Asia and introduction of the free press, more than one hundred newspapers and journals began publishing one after another. Some did not last long, and some made their mark on the formation of Iranian intelligentsia as well as the pop culture for years to come. Newspapers became an integral part of the young democracy.
These publications were not limited to the Capital Tehran. The widespread growth of papers throughout the country was not only a turning point for the development and influence of Journalism in the region, but contributed to the popular culture, use of ethnic dialects in printing media, preservation and propagation of folkloric arts, and introducing new forms of political satire.
Among all these valuable publications promoting freedom and defending the constitutional government, five papers had gone beyond fighting tyranny of the time and were writing about economic and social injustices and promoting social democratic and secular ideas:
1- Sour-e-Esrafil, Editor: Mirza Jahangir Khan Shirazi
2- Habl-ul-Matin, Editor: Hussein Kashani
3- Mossavat, Editor: Muhammad Reza Shirazi
4- Ruh-ul-Ghodos, Editor: Sultan-ul-Ulama Khurasani
5- Nassim-e Shomal: Seyed Ashrafolldin Gilani
They all had a long-term impact on the direction of the constitutional revolution. Most importantly they were successful in connecting with the masses. This connection was particularly successful through satirical approach and content in revealing the corruptions and highlighting the necessity of change.  Sour-e-Esrafil’s main satirist was Ali Akbar Dehkhoda, who later on authored two valuable literary works “Proverbs and Mottos” (Amsal-o-Hekam) and Dehkhoda’s Persian Dictionary. 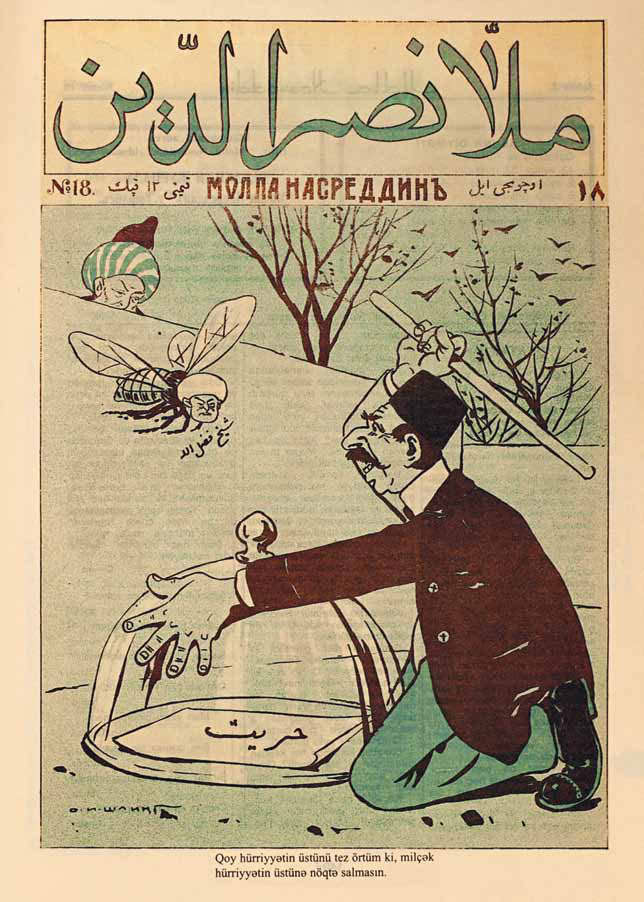 I’d better cover “Freedom” before flies could get to it. (The fly caricature is Sheikh Fazlollah Nouri, the influential cleric of Iranian Constitution era)

Molla Nasreddin
There is no doubt though that both “Dakho” (the character in Dehkhoda’s writings) and characters of Ashraf were under the influence of an Azeri publication out of Tiflis and later on Baku and Tabriz.

Published between 1906 and 1930, Molla Nasreddin was a satirical Azeri magazine edited by the writer Jalil Muhammadghulizadeh (1866-­1932), and named after Nasreddin, the legendary Sufi wise man­-cum-­fool of the Middle Ages. With an acerbic sense of humor and realism and illustrations reminiscent of a Caucasian Honoré Daumier or Toulouse­Lautrec, Molla Nasreddin attacked the hypocrisy of the Muslim clergy, the colonial policies of the European nations, and the venal corruption of the local elite. At the same time, Molla Nasreddin was repeatedly arguing for Westernization, educational reform, and equal rights for women. 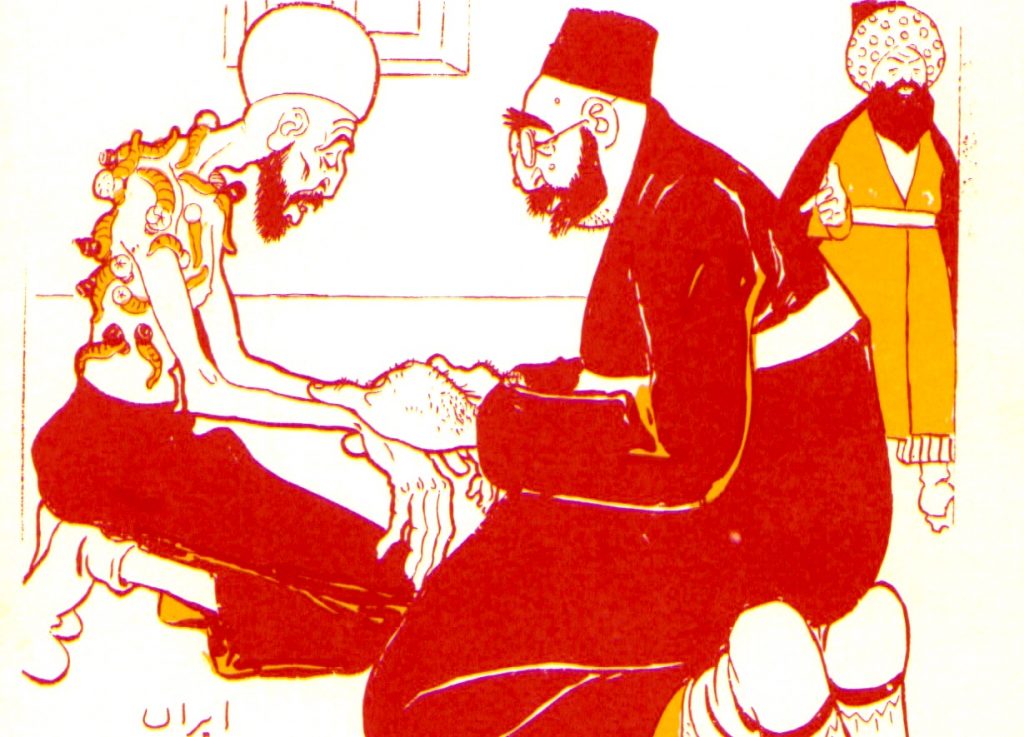 Iran: Dear doctor, the leeches have sucked my blood so much, please, I am dying… Doctor: No, no. It is not enough. There is the Constitution virus in your veins. 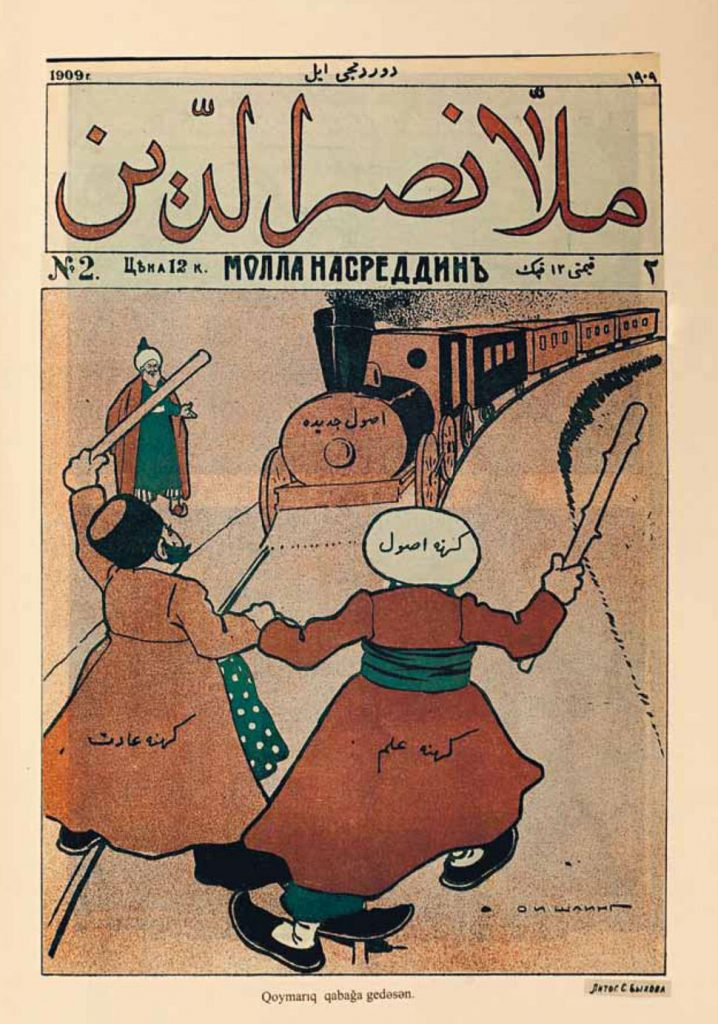 Train of “Modernity” is blocked by reactionary and fanatic forces

Publishing such stridently anti­clerical material, in a Muslim country, in the early twentieth century, was done at no small risk to the editorial team. The fanatics often harassed Molla Nasreddin’s writers and staff. On more than one occasion, Muhammadghulizadeh had to escape from protesters incensed by the contents of the magazine. Managing to speak to the intelligentsia and the masses, Molla Nasreddin was an instant success and would become the most influential and perhaps first publication of its kind to be read across the Muslim world, from Morocco to India. Roughly half of each eight­page issue featured illustrations, which made the magazine accessible to large portions of the population who were illiterate. And like the best cultural productions, Molla Nasreddin was polyphonic, joyfully self-­contradictory, and staunchly for creolization that results from multiple languages (it drew on three alphabets), ideas, and identities (its editorial offices were itinerant between Tbilisi, Baku, and Tabriz). While it helped give rise to a new Azeri intellectual culture, Iran was arguably the country where it had its most audience. 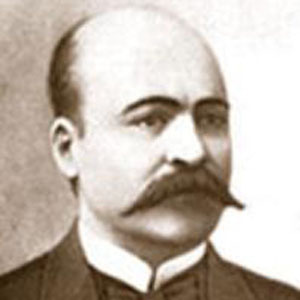 Molla Nasreddin focused relentlessly on the inefficiency and corruption of the Qajar dynasty, the Ottoman Empire, the elite Emirs of Bukhara, and the colonial powers. At the same time, it was fighting with the Muslim fanatics and the hypocrite clergy. Molla Nasreddin’s essays and illustrations acted as a preamble of sorts to the Iranian Constitutional Revolution of 1906-­1910, which resulted in the establishment of the first parliament in all of Asia. During Molla Nasreddin’s two and a half decade run, the country at the heart of its polemics and caricatures—Azerbaijan—changed hands and names three times. By 1920, the Soviets had invaded Baku; the quality of the magazine’s editorial and art direction suffered as it was forced to toe the Bolshevik party line. Only three issues came out in 1931, and shortly afterward it shut its doors for good. Its impact, however, is difficult to over­estimate. Molla Nasreddin offered inspiration to similar pamphleteers from the Balkans to Iran and Serbia.

Poems in Molla Nasreddin were compositions of Mirza Ali Akbar Taherzadeh (Saber), the most prominent Azeri poet. Saber’s perspective on socio-political affairs influenced some activists and other journalists during the Iranian Constitutional Revolution. 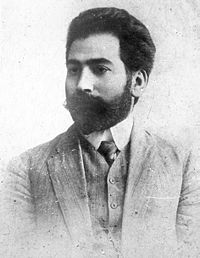 Molla Nasreddin’s illustrations were masterfully created by Azim Azimzadeh (1880-1943) and contributed to the publications’ success. Azimzadeh was the founder of Realist painting movement in Soviet Azerbaijan. His creative career had started at the time of first Russian revolution in 1905. He composed more than 56 color lithographs for Saber’s famous “Hop Hop Nameh”.  His other works included 50 “Anti-Fascist” caricatures. 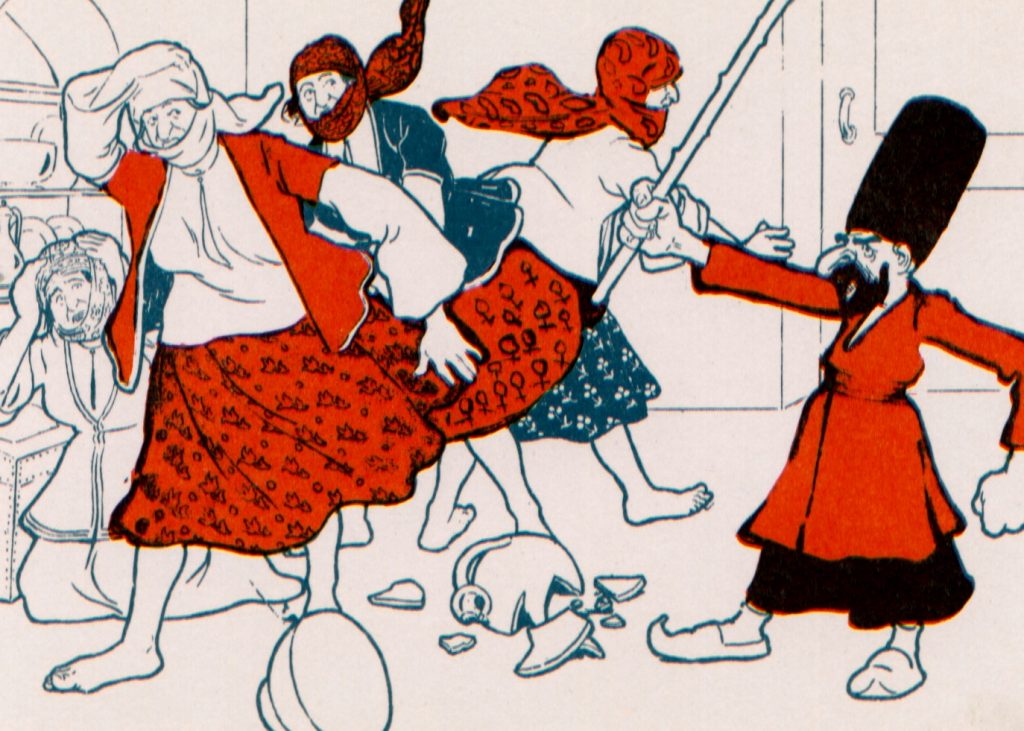 I can handle four wives, but more than that is a bit of problem 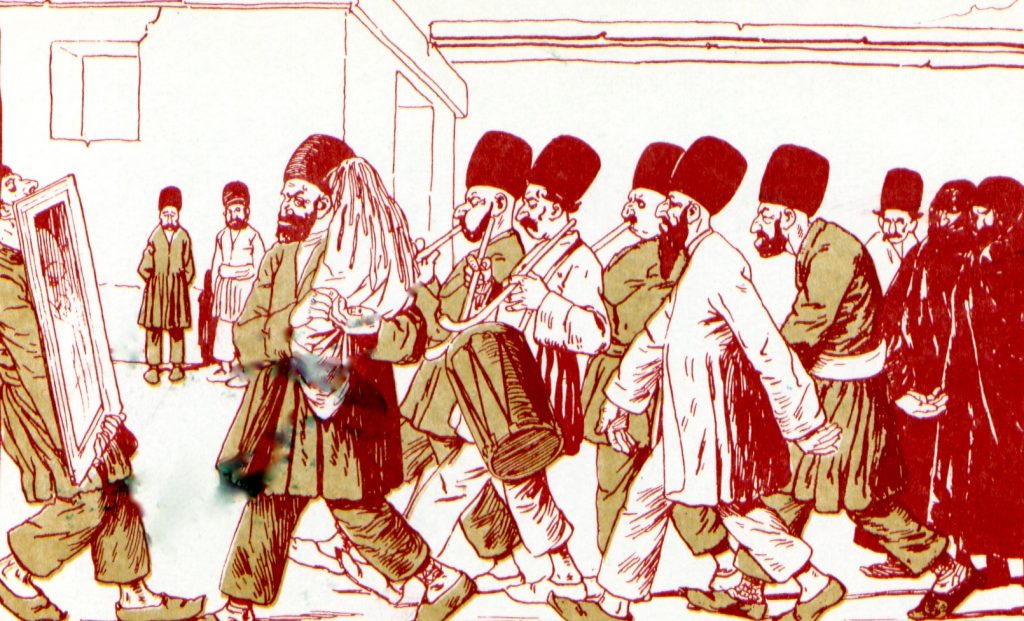 “Small or large, does not matter when it comes to socks and girls.” 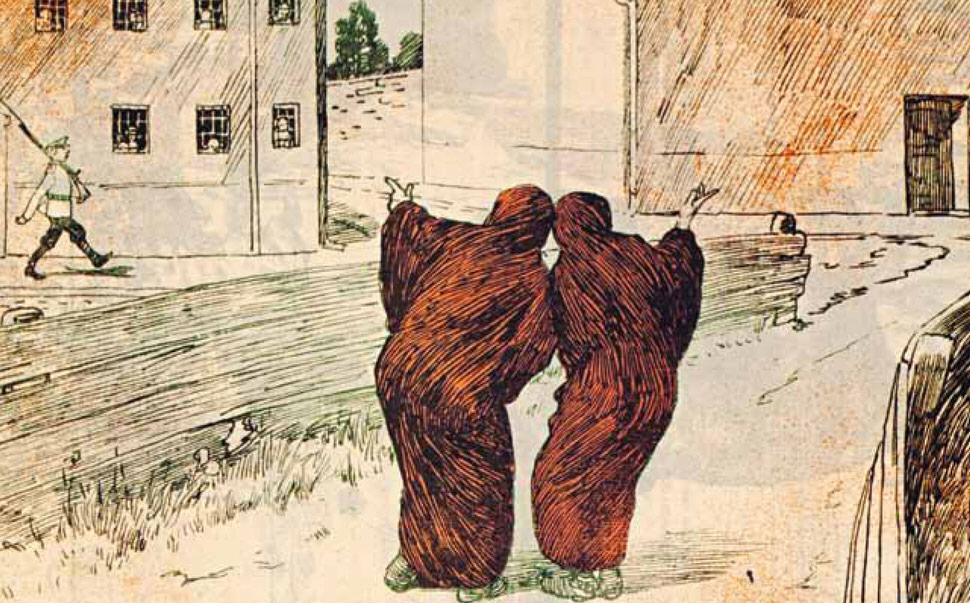 “Oh Dear, Look, they have windows” 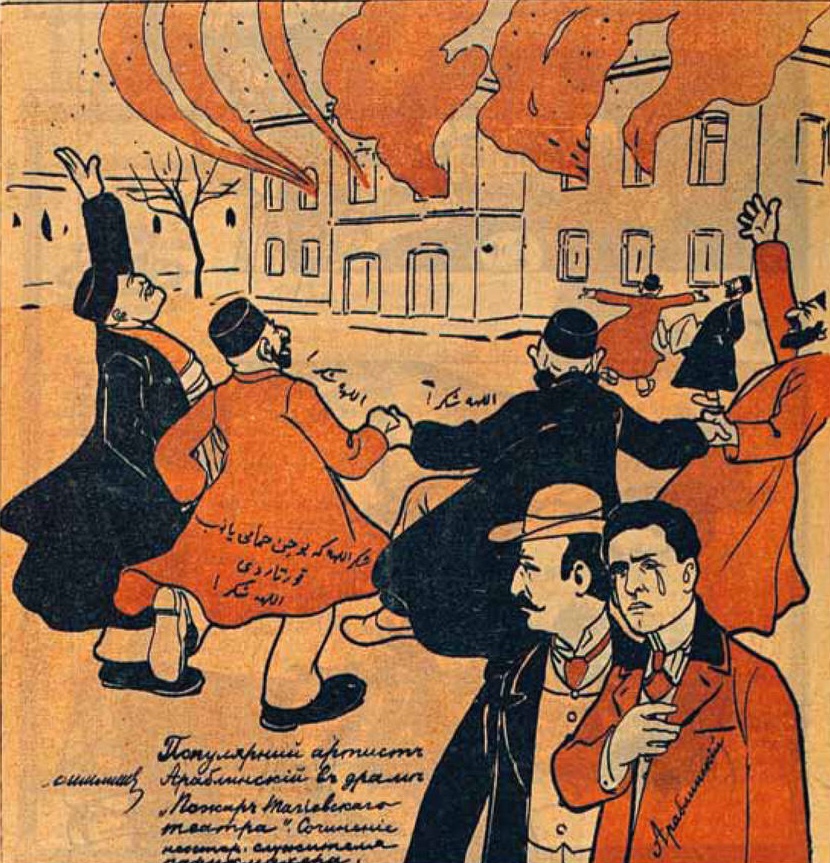 The tragedy of Tagiev’s theater burning in Baku. As the fire rages, the clerics rejoice and yell, “Thank God,” “God is Great.” Renowned actor Arablinski: “ I played so much tragedy and woe on that stage that at the end, the woe is on me as well. 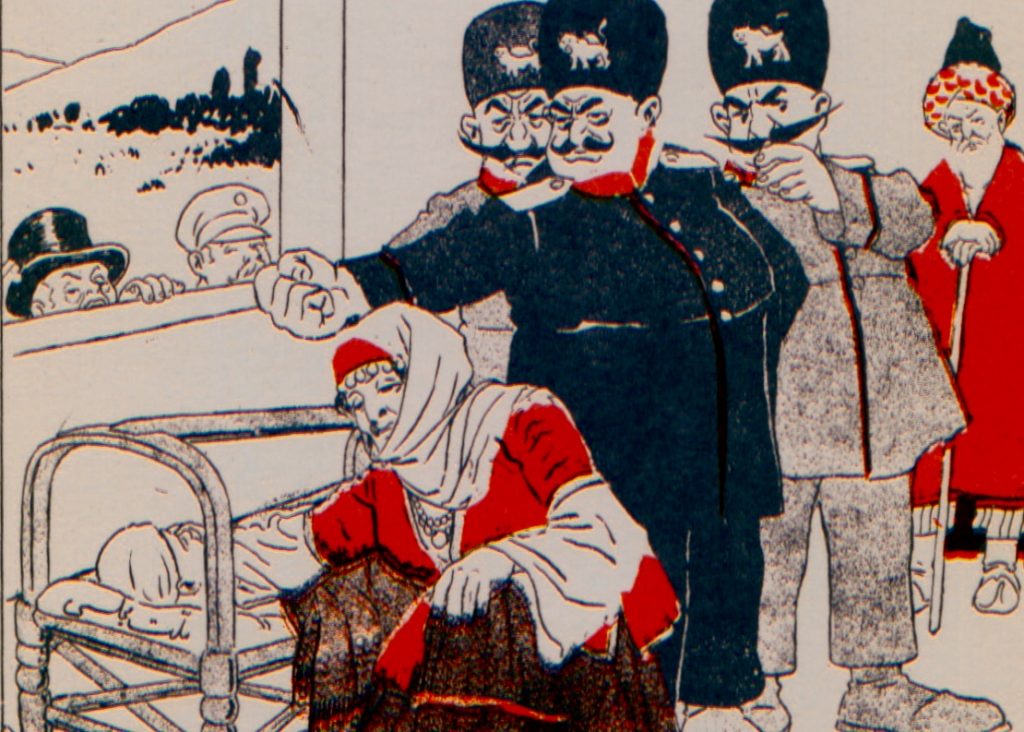 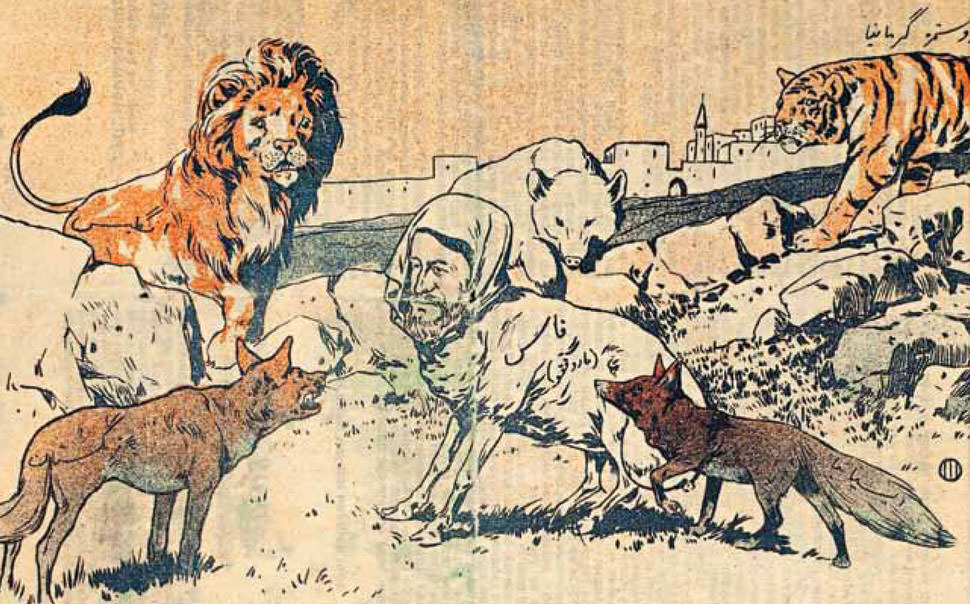