Writer: Arturo Desimone
How could anyone experience war, or desert one’s country without taking refuge in the intimate?

Atousa’s mind-boggling paintings and drawings have many autobiographical elements. These tend to be her most intimate, and therefore all the more universal, experiences. Memories of a young girl’s coming of age, or of family trips, are placed not only within the plans of the artist’s meticulous craft, but within the far messier context of Iran, and the backdrop of war and emigration.

In ‘Birthday‘, using her daughter as a model, the artist is a 13-year-old. A bow sits in her hair as she stands with her grandmother, staring longingly into the camera of a family photographer; above them, pink panties hang like tent-banners from clotheslines. Girl and grandmother are flanked by the arid lands surrounding Shiraz, and by the flag-like caravan of panties. Leering wolves appear behind the girl (these are boys, who the elders warn of.) Hovering above the wolves’ ears are Iraqi fighter planes. 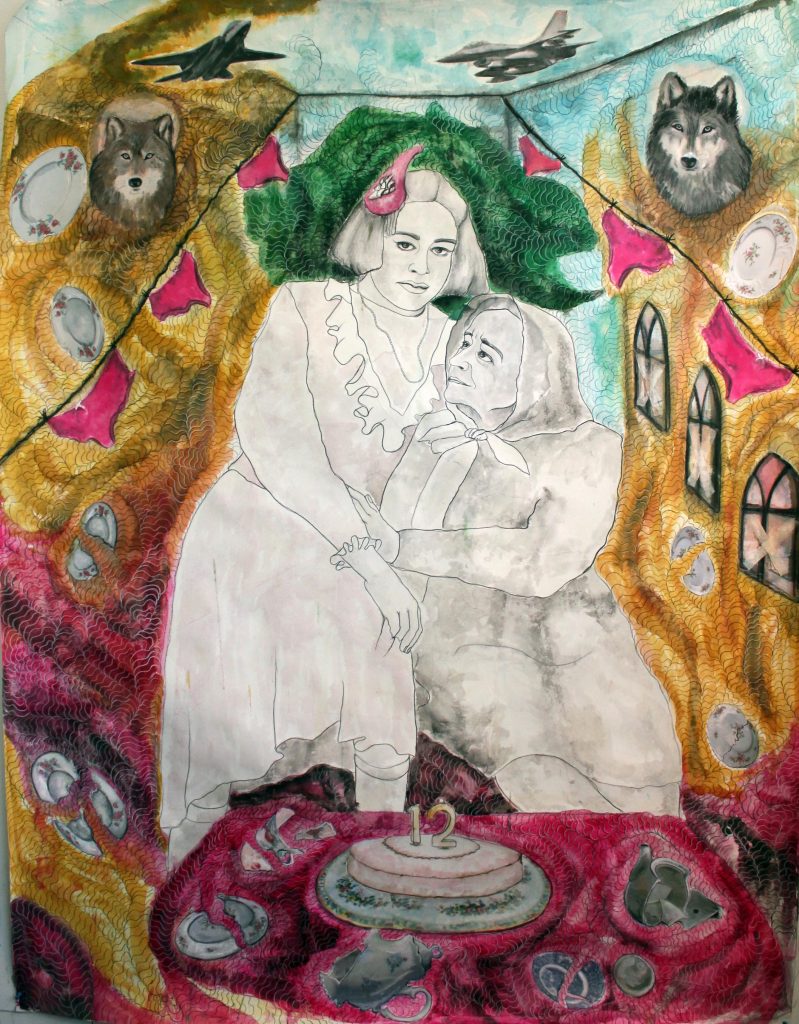 Atousa’s art requires no conscious intellectual formula for her viewers to remember that the intimate and the political are connected. How could anyone experience war, or desert one’s country without taking refuge in the intimate? How can the exiled person, fugitive of a subtropical oriental country, living in the Netherlands and unable to speak her own language every day, then not be concerned with sentimentality, or with memory? Atousa does not seek to find connections between personal and political, as many dilettante memoirists strive to do, wrongly interpreting “the personal” as domesticity or triviality. Instead of bridging, Bandeh is trying to untie, to separate the inseparable. Her self-destructive effort is as meticulous and female as it is cruel. It results in a disturbing, beautiful dream. 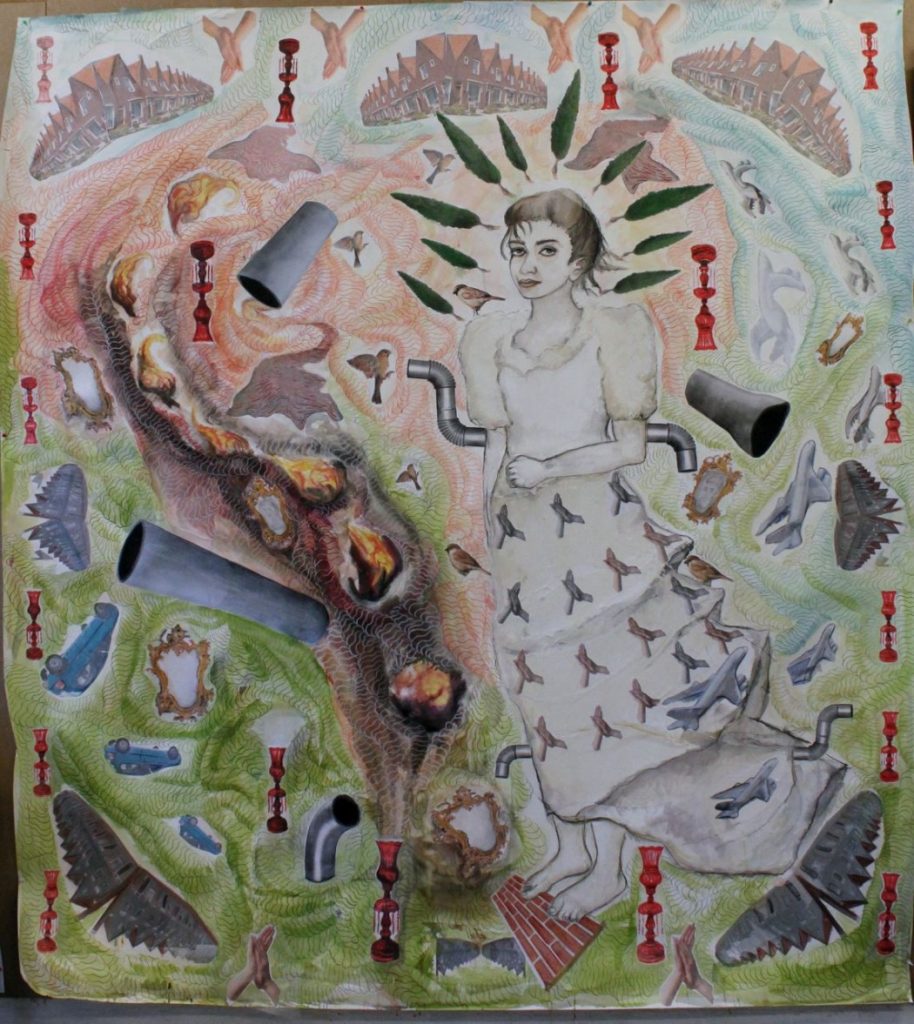 Atousa Bandeh’s drawings and paintings from the 2013 exhibition titled Dynamism of the Dream, at Lumen Travo gallery in Amsterdam, reveal the continuation of an artist’s passionate, intricate investigation into the soul, rather than into current sociology. The soul, sentiment, fantasy: these are stamped as very dirty words today by contemporary art establishments. Bandeh, however, has no intention of cleaning up her pictures: the soul is a dirty affair, full of sex, politics and other un-falsifiable poisons.

Her paintings intuitively connect superimposed layers of period artistic schools and ideologies. There is a fixation on Italian masters, Raphaelite and Boticellian quotes…but then all is in flux, a futurist and modernist motion completely disrupts and derails any hope for a static, idealized Renaissance or for that matter, progressive vision of the world. There is immense collapse, failure of human endeavours to impose order, the opposite of (post-)Renaissance idyll. 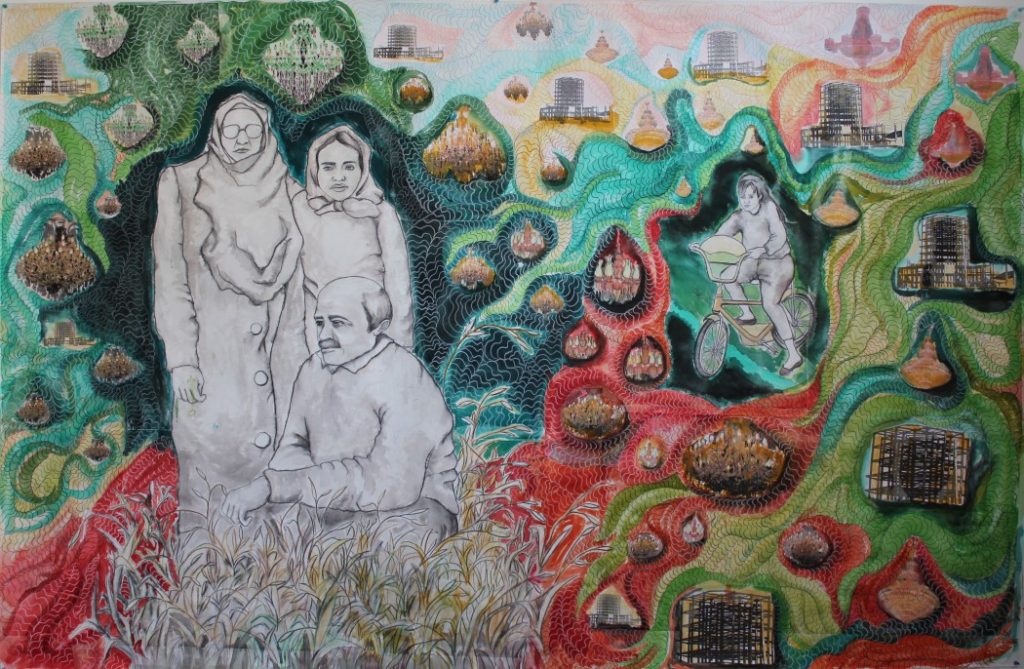 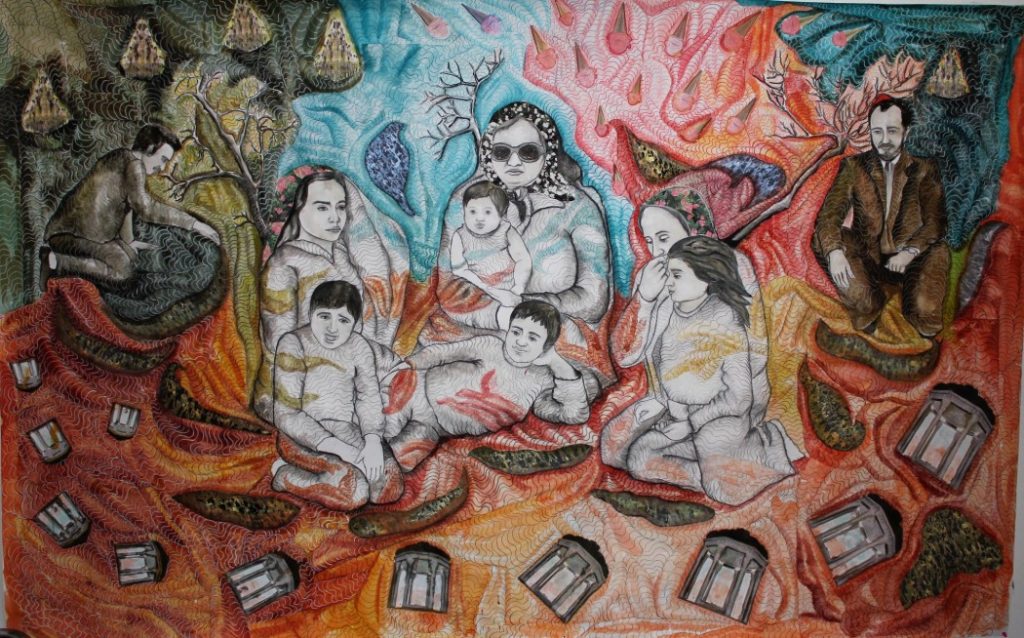 In her drawings, gardens are the meeting-places for unsettling forces. Corruption enters a Garden of Earthly Delights, like in Bosch…Only we do not know how to place Bosch in his paintings for the religious collectivity, perhaps meant to be impersonal. The corrupted gardens of Atousa use her daughters as models. Soft, intimate drawings contrast with the violence and brightness of the large painting ‘Cypresses of Shiraz‘ (sold at the 2015 Amsterdam Art fair) in which a young girl stands dressed in a fairy costume, crowned by cypresses. She is Spring, carrying a coronation, like a Catholic Magdalene icon. Looming butterflies sit in the jagged corners of the painting. But upon closer inspection, these moths are collage cutouts made of industrial complexes. They combine sweetness, with a recollection of how the industrial revolution directly impacted the mutation of butterflies and their natural selection. Fires and jet planes also mirror the butterflies. 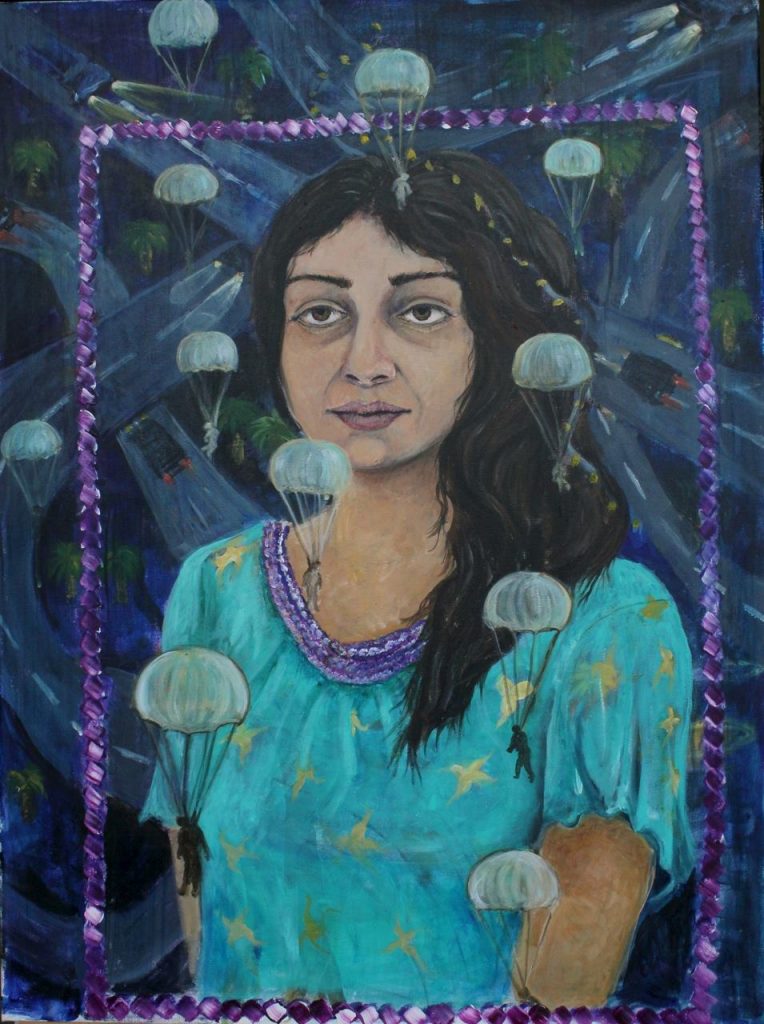 Atousa came of age just after the Iranian revolution and its disillusionment. Her adolescence was spent in the shadow of the Iran-Iraq war, (often termed ”the World War 1 of the Middle East”). Her work, full of urgency and apocalypticism, at times resonates the work of certain poets and filmmakers, such as the dream-like landscape of Abbas Kiarostami’s film ‘And Life Goes On’ that contains a long take of the village of Koker in the wake of its destruction by earthquake. 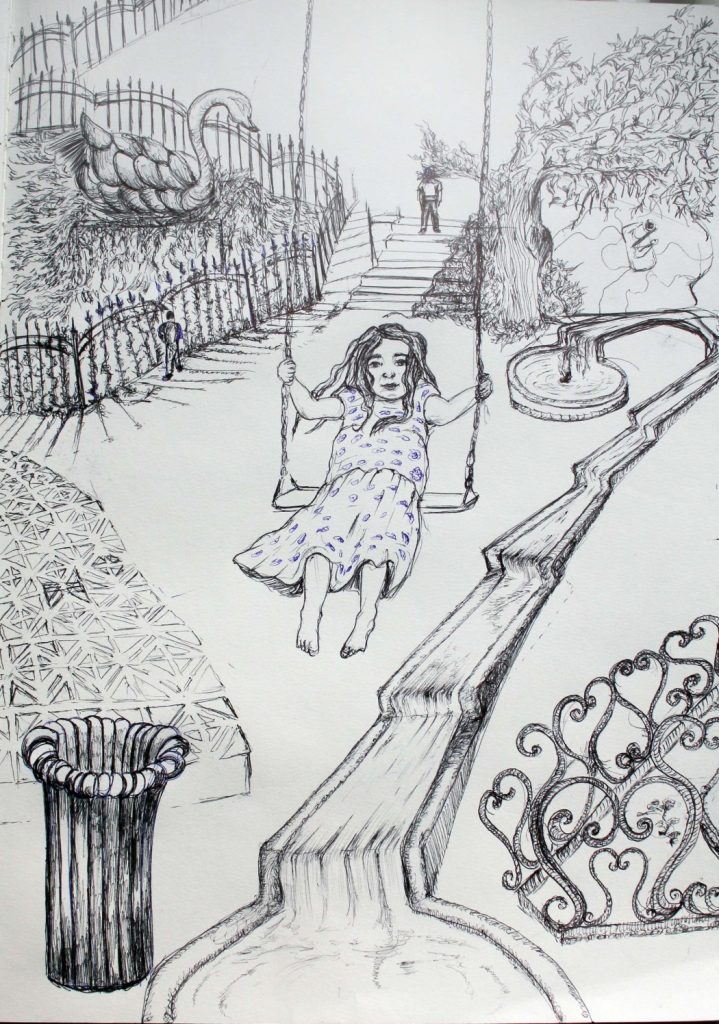 Atousa’s apocalyptic, intimate rooms are new and refreshing, but they don’t just carry hints of Persian influences. There is an ‘westernist’ yearning, first the art she imagined existed in Europe before she disastrously got here, as well as Latin American-ism: the association with Frida Kahlo’s self-portraiture is impossible to repress. “Kahlo makes me cry” she admits. 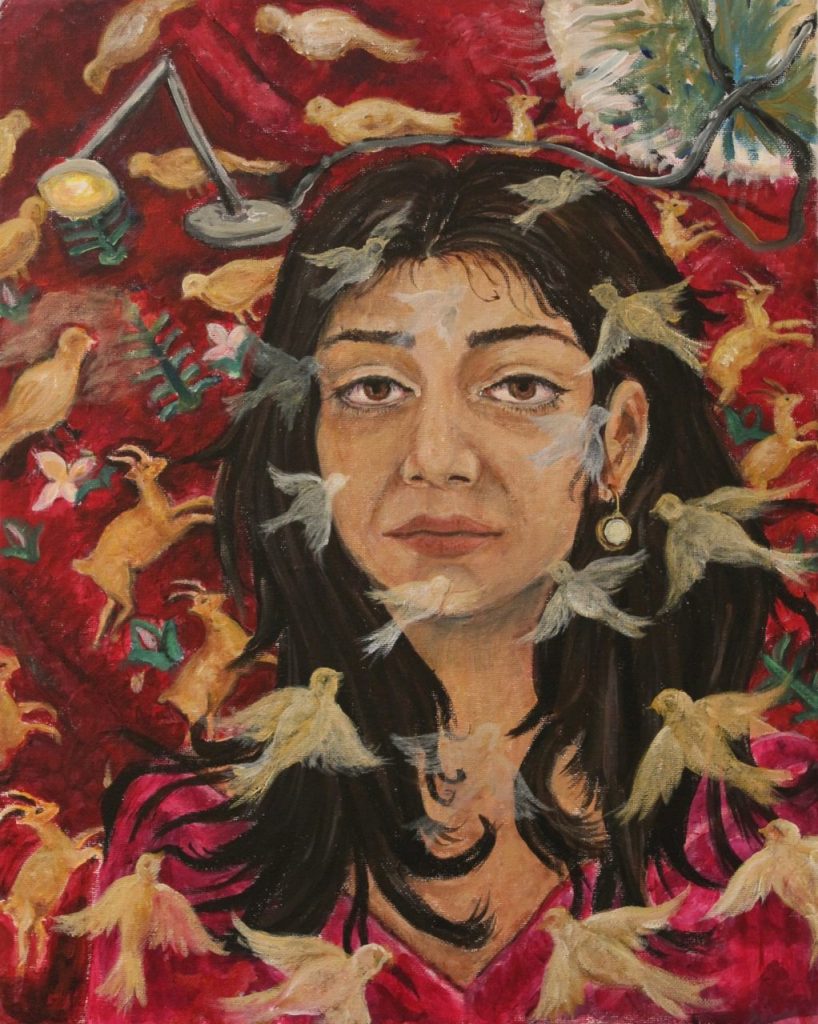 The artist’s ruptures are the fall from innocence, into an enticing sexuality as well as the wound made by a country and life ravaged by the motion of history. The men in parachutes in her painting ‘untitled self-portrait‘ slowly float from the sky upon her face as a young girl—the hangmen in parachutes resembling measles, or jellyfish, gently descend. We feel attraction to the woman, despite danger, the curling highways of Teheran’s modernity in the background.

Contemplating and witnessing war are universal experiences in art and in human memory, yet today in a time when it seems almost omnipresent, war is oddly misrepresented, somehow as an occurrence in culturally specific and exotic locations. That misrepresentation occurs foremost in the countries where the art market has its centers. Young artists, even from third world countries, have an agile command of the jargon of social sciences and critical theory, but they miss the basic human experiences separation and of conflict, such as having another person die in one’s arms. The political and philosophical potential of the latter cannot be replaced by references to Foucault, Baudrillard or Derrida. More Atousa is needed. 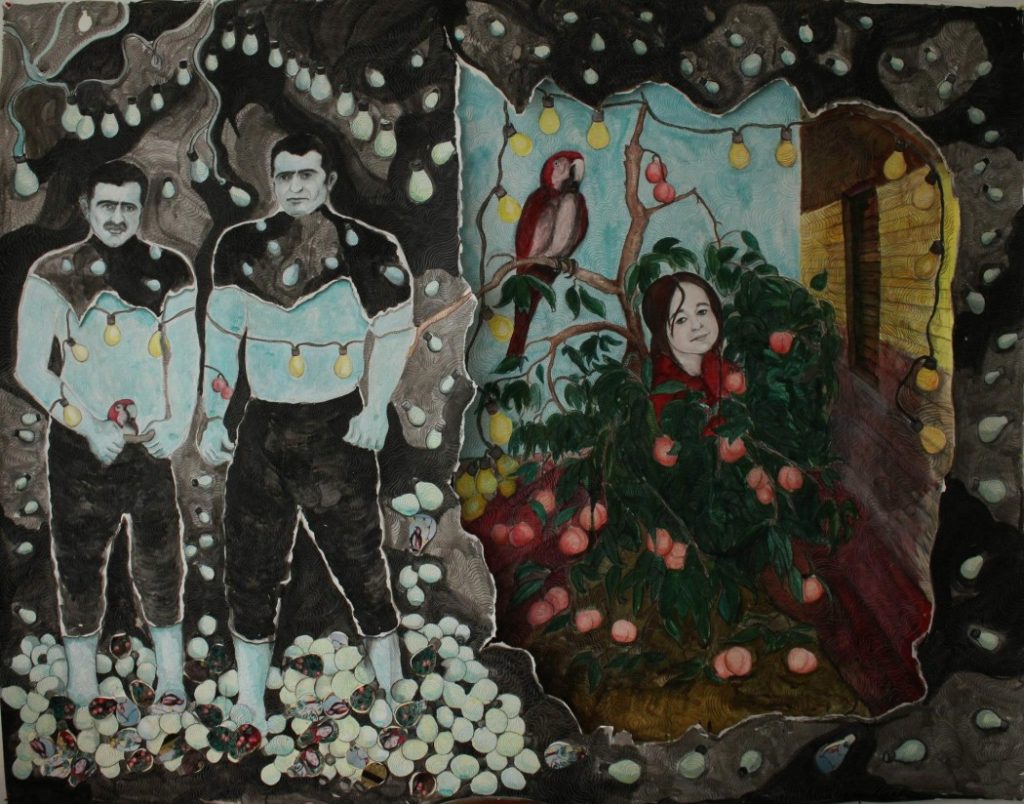 As a rebellious, younger artist who had recently arrived in the Netherlands, Atousa admits to the activist fun she had photoshopping her face into every picture of World Press Photo. Since then she gets further away from the terrains of identity politics, feminist confrontation, and fun: all forums she was introduced to as a young emigrée in Europe. “I am a failed astronomer” she admits. She first studied astrophysics in the Netherlands. “I thought science was more difficult than art. I was intimidated. But after studying astronomy, I learned that art is more difficult and I have been challenging myself with art and abandoned science.” She went to the Sandberg academy after leaving the northern city of Groningen where she studied astrophysics.

The inhabitants of paintings from her exhibition Dynamism of Dream, such as ‘the apple tree‘ or ‘those days‘ use her Shirazi family as models posing in the painting. Her family members and herself remain gray, as if made of ash. The ashen figures seem to be held in one place ephemerally, burnt by the ravenous passage of time. Meanwhile, the coloured parts of the painting are doused in nearly dancing and shimmering lights, the textures resembling Islamic abstract art, or the skin of a serpent in a hallucinogenic dream of Carlos Castaneda-style vision quests. The movement in her paintings could be compared to to the Italian futurist Boccioni’s Music, only Boccioni cannot withstand where Atousa succeeds: the Italian futurist is static, an ode to progress, and his colourful rays do not manage to capture music, unlike Atousa’s burnt yet beautiful world.

We try to discuss the topics that previous interviewers instantaneously generate in a conversation with an Iranian artist: Sufism. Rumi. Spirituality. Traditional Iranian music. Her past interviewers have done so. “I hate that! This generation is ‘generation wisdom’. I have no wisdom at all.  Atousa insists she prefers Monteverdi and Schubert, or the more this-worldly Arab traditional orchestra, to traditional Iranian santour and to the singing of sufi classical maqam music by Lotfi and Shadjarian; the poetry of Hafez, with its embodiment, heresy and wine to the pedagogy, holy light and wisdom-preaching of Rumi. Her studio is brimming with this kind of music as she works. Her paintings are still mystical and religious, as well as the pain and personal sentimentality of being in the fragmented world and of trying to live. 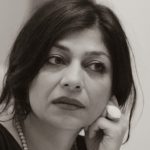 Atousa Bandeh Ghiasabadi (1968, Iran) is an Iranian-Dutch visual artist and filmmaker based in Amsterdam. She studied Art at Minerva Academy and Film and Video at Sandburg Institute. In addition to a collection of paintings, her portfolio includes films and video projects including: Ant’s I View, My Own 1000 Square Meters, 12 Days of Waiting, The Day I Disappeared and Angels Voices above the Flight Tower 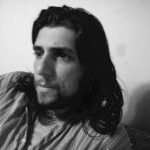 Arturo Desimone is currently based between Buenos Aires and the Netherlands. His poems and short fiction pieces have previously appeared in The Missing Slate, The New Orleans Review, Hamilton Stone Review, Counterpunch, Hinchas de Poesía and Acentos Review. A book of poems he wrote during and after travelling in (post) revolution-era Tunisia is forthcoming to be published in Argentina with the poetry publisher Audisea. Desimone’s drawings and visual art have exhibited in showing-rooms in Dutch cities. Visit Arturo’s website.