Writer: Sepehr Ardana
Attar’s long poem is the emphasis on two major themes of Sufism: the necessity to purify one’s self from all desires, to reach a level of passionate love that is a union with the beloved

Farid-ad-Din Muhammad Attar (1145-1220) is one of the three pillars of Persian Sufi literature. Sana’i Ghaznavi, who for the first time, exerted love poetry to beings beyond human material affections, and Jalal ad-Din Muhammad Balkhi, Mowlawi (Rumi) are considered to be the other two. Professor Shafiei Kadkani places Hafez, the other mystical Persian poet in a category of his own. He believes Persian Sufi poetry began with Sana’i, perfected with Attar and reached its peak with Mowlawi.
The Western reader is familiar with poetry and Sufism of Rumi. Before Sana’i, the Sufis used all poetry of ordinary love and ecstasy to express their mystical devotion to the ultimate “Beloved.”
Sana’i is the first poet who brings a worldview of mysticism to Persian poetry.
Attar (the literal meaning: herbalist and perfume maker), is the first Sufi poet/ writer who dedicated all his works to Sufism. He never served any court or a king – “ Not a morsel have I tasted from a tyrant’s table…” In all his poetry hardly a single line has a meaning and reference beyond a gnostic view of being.
Attar was eventually killed during the Mongols invasion. Attar did not reach much fame as a poet during his lifetime. Nearly three hundred years after his death, in the fifteenth century, he was recognized as a Sufi poet. Some works are attributed to Attar, of which Tadhkirat al-Awliya (Memorials of the Saints), Ilahi-Nameh, Mukhtar-Nameh, Diwan, and Conference of the Birds (Manteq-ut-Tayr) have been verified.
Attar’s connection to Sufism is not entirely clear (1). No Mentor, Guide, or Sheikh, as it was the tradition of mystical learnings is known to have been Attar’s instructor. “Rumi believes that Attar had, in fact, no teacher and was instructed in the Way by the spirit of Mansur Hallaj, the Sufi martyr who had been executed in Baghdad in 992.
Conference of the Birds, which is just under five thousand lines in original Persian (about the length of Dante’s Inferno) is built around the main core of Sufism: soul’s quest to unify with God.
A flock of birds gathers and acknowledge the Great Simorgh as their King and leader. They have to fly to the ends of the earth – mythical Qaf Mountain to find him. Attar took the title from a passage in Koran about King Solomon and his claim that he knows the language of the birds. The birds’ journey is led by Hoopoe, Solomon’s trusted messenger. At the beginning of the journey to find their king, each bird presents an excuse for not being able to make the journey. In his role as the spiritual guide, the hoopoe tells the assembled birds many short parables and addresses their hesitations, complaints, fears, vanities, and questions. He tasks them to renounce their material comforts and their fears and join him on the journey, passing through seven valleys to reach Simorgh. First is Valley of the Quest. Second is Valley of Love, where reason is abandoned for the sake of love. Third, is Valley of Knowledge. In this phase, worldly apprehensions become utterly useless. The fourth valley is Valley of Detachment. All material desires and attachments are given up. Fifth is Valley of Unity, where the Wayfarer realizes that everything is connected and the Beloved is the force behind every harmony, multiplicity, and eternity. Valley of Bewilderment is the sixth valley where Wayfarer perplexed by the beauty of the Beloved, finds he or she has never known anything. Finally, the Seventh is Valley of Poverty and Annihilation.
There could be no better introduction to Sufism thinking and way of life, than Attar’s Conference of the Birds. The aspirant has to purify his ‘nafs” (his self), from its inclination to “shahwat” that is the thoughts and desires of the natural man, and substitute these with “mohabbat”; then must be cast into the flames of passion “eshgh” to emerge in the state of union “wasl” with transmutation of self “fana” through the gift of bewilderment and dazzle “hairat” to everlastingness “bagha”.

Most of the book is organized around the hoopoe’s answers to the birds’ questions, excuses, and objections. After each response, the hoopoe tells a parable related to the reasoning. (Obviously, each bird represents a human type: the nightingale is the lover, the finch is a coward, the hawk boasts that he already enjoys connections with the kings:

The hawk came forward with his head held high;
His boasts of grand connections filled the sky
His talk was stuffed with armies, glory, kings
He bragged: “the ecstasy my sovereign brings
Has turned my gaze from vulgar company
My eyes are hooded and I cannot see,
But I perch proudly on my sovereign’s wrist
I know court etiquette and can persist
In self-control like holy penitents;
When I approach the king, my deference
Correctly keeps to the established rule.
What is this Simorgh? I should be a fool
If I so much dreamt of him. A seed
From my great sovereign’s hand is all I need
The eminence I have suffices me.
I cannot travel; I would rather be
Perched on the royal wrist than struggling through
Some arid wadi with no end in view.
I am delighted by my life at court,
Waiting on kings or hunting for their sport.”

The hoopoe answers him:
The hoopoe said: “Dear hawk, you set great store
By superficial graces, and ignore
The all-important fact of purity.
A king with rivals in his dignity
Is no true king; the Simorgh rules alone
A king is not one of these common fools
Who snatches at a crown and thinks he rules.
The true king reigns in mild humility,
Un-rivalled in his firm fidelity.
An earthly king acts righteously at times
But also stains the earth with hateful crimes,
And then whoever hovers nearest him
Will suffer most from his destructive whim
A courtier risks destruction every hour –
Distance yourself from kings and worldly power
A king is like ranging fire, men say
The wisest conduct is to keep away. (2)

Finally, the group of birds adopts hoopoe as the leader and the guide and begin their journey. It is within these encounters with the birds and their questions and concerns that Attar puts anecdotes and parables of human flaws and strengths into his narrative. At last, the birds reach the court of Simorgh. First, they are rejected, but finally, they are admitted and find that the King and Leader Simorgh they have sought is none other than themselves. Only thirty (si) birds (morgh) are left at the end of the journey. (si in Persian means thirty and morgh means bird). Thus, si morgh meet Simorgh.
Attar’s long poem is the emphasis on two major themes of Sufism: the necessity to purify one’s self from all desires, to reach a level of passionate love that is a union with the beloved.

Attar’s “Manteq ut-Tayr” is composed in Masnavi (Mathnawi) format. This format is written in rhyming couplets, more specifically independent, internally rhyming lines. Masnavis usually follow a meter of eleven or ten syllables but have no limit on their length (a range of 2000 to 9000 “Bayts” (verses). Masnavi is the most common platform used by classical Persian poets. Its structure consists of an introduction (invocation), the main body of the story and an epilogue. Unlike other formats of Persian poetry, and due to the narrative structure of Masnavi, any book or story composed in this style is meant to be read through, as the context clarifies the meaning (allegories).
Famed Persian Masnavis; “Masnavi Ma’nawi” by Jalal ud-Din Rumi, or Conference of the Birds are full of allegories that without their contextual, mythical, and mystic references appear as simple parables. 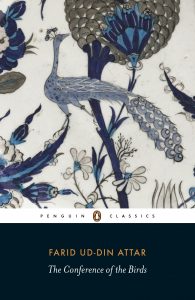 Cover of Conference of the Birds, translated by Dick Davis

On translating poetry and Conference of the Birds in English
Robert Frost once described poetry as “what gets lost in translation.” Translating Persian lyrical poetry with layers of allusions and allegories is a true testament to Frost’s opinion. Although Attar’s masnavi is composed in a relatively direct language, translating it into any language, is a challenge. Partial and casual translations of the book into English were attempted by Masani, C.S. Nott, and Edward FitzGerald. The first complete translation of Conference of the Birds was done by Dick Davis and Afkham Darbandi in 1984 through Penguin Classics (reprinted in 2011). They maintain the rhyming of the original as much as possible. They have translated one Persian line by one couplet and in some cases, have compressed two lines of the poem into one couplet:
“A lover,” said the hoopoe, now their guide,
“Is one in whom thoughts of Self have died;
Those who renounce the Self deserve that name:
Righteous or sinful, they are all the same
Your heart is thwarted by the Self’s control
Destroy its hold on you and reach your goal.
Give up this hindrance, give up mortal sight,
For only then can you approach the light
If you are told: “Renounce our Faith,” obey!
The Self and Faith must both be tossed away.

The most recent translation of Farid ud-Din Attar’s Conference of the Birds is done by Sholeh Wolpé (Norton, March 2017). 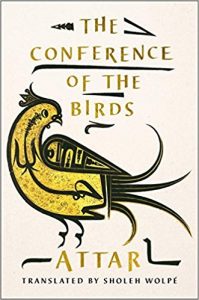 Wolpé has translated this in a fashion she calls “Poetic Prose.” She writes in the introduction:
“Translation makes cross-culturalism possible when the “otherness” of a work is preserved. As a bilingual and bicultural poet, I believe that freshness of a text is best communicated when the translator does not attempt to “translate” the untranslatable….”
An example of Sholeh Wolpé’s poetic prose is the parable the hoopoe narrates to the Duck’s excuse about “The World as a Drop of Water.”
“A man asked a Wayfarer: “Everyone has his own fantasies of the two worlds. What are they really?”
The Wayfarer replied: “Both worlds, the upper and the lower, are but a drop of water, neither here nor there. When that droplet first appears, it is replete with reflections. But even if all those reflections were of iron, the hardest of metals, you could still shatter them back into water drops. Whatever has its foundation in water, be it fire, is nothing but illusion. When water itself is not stable, how can you use it as a firm foundation?”

Wolpé’s introduction on the story and Sufism is interesting. Her explanation of Attar’s poem at some instances aims misguided extremism inflicted our world today. She insists that her version “is not a translation of form, nor is it a scholar’s translation.” She has used the most recent and complete Persian version of “Manteq u-Tayr” edited by Mohamad Reza Sahfeii Kadkani (Although professor’s last name is misspelled as Kandaki! Ironically, Kadkan is the birthplace of both Attar and professor Shafiei!).

Whether in “rhyming couplets” or “poetic prose” the availability of this Persian masterpiece of Sufi literature is a precious opportunity.