The Blind Owl- According to Emran Salahi

The difference between our Ahmad Agha and Farhad was that Farhad had an ax in his hand, but Ahmad Agha had a pick on the neighbor’s wall.

One evening, when the neighbor was in disarray, the wall behind him fell apart, and he heard a voice saying, “Akbar Agha, why are your lips swelling?”

The neighbor pulled himself together and asked: “What the heck is your excellency doing here?”

At the hospital, all efforts were made so Ahmad Agha does not get into depression as he might strike his head with the pick on his way to unifying people, probably under Farhad, friends, family members, and relatives’ persuasion who came to visit. They had brought him things to uplift his spirit and make him hopeful. They also talked about subjects that could boost his hopes. For instance, when they opened the compote can, they would say that there should be no distance between man and nature, and regarded the can a barrier to be taken away with the opener. This would allow Ahmad Agha to establish a direct connection with fruits. One person brought him flowers, another brought sweets, and candies, and a friend brought him the “Blind Owl” book.

The Doctor took the book away saying “this book created hopelessness in the patient and he might even commit suicide.” 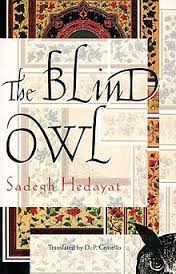 One of the companions said: “Oh, Doc! Our Ahmad Agha is very interested in reading. Please allow him to read the book.”

The Doctor said: “this is the kind of reading material that has caused him to become what he is now. He may read, but not this book. There are so many newspapers and magazines for him to read. Give him the newspaper. He should read about the news too.”

Ahmad Agha was lying on the bed reading the newspaper. On the first page, there was this headline- “A young man whose identity is disclosed by his initials AF, while trying to clean his washing machine, mixed bleach with sulfuric acid which blew up the machine and put him on the verge of death.”

Ahmad Agha remembered the poem “On the Verge” by Shamloo and felt that his body was changing into steam as a result of chemical interactions. He turned the page over. There was another piece of news: “A passenger who had got into a Peikan taxi driven by Reza Hashemi to go to Elahieh stabbed the driver with a knife threw his body on the roadside and escaped.”

Ahmad Agha felt his bed had turned into a vehicle moving through the desert. A patient in hospital rope standing on the roadside was waving at him to stop. Ahmad Agha stopped his bed. The passenger got on the bed and sat on Ahmad Agha’s head.

Before the passenger dealt with the driver, Ahmad Agha turned over the page and read this news: “Due to heavy rain falls, all city sewers; industrial and agricultural have flown into the Anzali Lagoon.”

Ahmad Agha said to himself: “What is the use of having a direct connection with nature? All the pleasure that I had in mind was to go to Anzali Lagoon on the day on a boat and row through the water lilies and watch the seagulls. Now, I presume there is no trace of any lilies or seagulls.”

Ahmad Agha turned the page over and read another headline: “An unemployed citizen in Turkey, having lost all hope of getting a job because of severe economic crisis, committed suicide by cutting his veins on both wrists, in front of the Turkish Parliament.”

Ahmad Agha got a surrealistic vision. He felt all his veins had come out of his body and rolled around his neck like snakes and blood were running out of their mouths. He turned the page quickly just to relieve himself. His forehead was covered with cold drops of perspiration.

He turned to another page. “Collision of a balloon with electric lines killed at least six people.” He thought “there is the balloon. We were worried about aircraft colliding with the Twin Towers. It is good we are not in the balloon. Now I feel sorry for those who are taking the Toochal Telecabins.” Before the telecabin hits the high voltage grid, the newspaper was turned over, and there came some more news in front of Ahmad Agha’s eyes: “Three young German men; 14, 17 and 18 years old threw themselves down the bridge 87 meters high in Richen Bach, east of Germany.”

Ahmad Agha rolled up the newspaper and tossed it out through the window. He would probably have rolled himself if there were no bars on the window.

Ahmad Agha then began to sing: “…Leily my love, I wanna go to the mountains, I wanna go hunting,  hunting a deer, where is my rifle Leily dear?”

The doctor had seen him again. He told the visitors: “Give him the same Blind Owl by Hedayat. Kafka’s Metamorphosis is not bad either.” 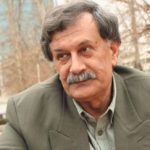 Emran Salahi (1946-2006) was a prominent Iranian satirist.
“The Blind Owl” by Sadegh Hedayat is a masterpiece of modern Persian literature. The novel first published in 1936 in Bombay. It is a dark novel. The narrator, a painter with mental problems and depression, is talking to a shadow on the wall of his room which resembles an owl. The book was originally banned in Iran on the pretexts of suicidal effects on its readers. The Blind Owl has been translated into different languages. Emran Salahi titled this short story about the Hedayat’s novel.