How do they differ?

Politics, competition, influence and power fuel the current sectarian tensions between Shia and Sunni Muslims, the two largest branches of Islam. The root of the hostility is a political question in itself: who is the legitimate successor to the Prophet Muhammed?

Both Sunnis and Shiites share common religious beliefs: the five pillars of Islam, the Quran, and Prophet Muhammed being the last messenger of God. The differences lie mostly in the Shia and Sunni interpretation of the hadiths and sharia law on how Muslims should define and govern themselves. But for the most part, the religious differences are superficial. The conflict and violence are more about political power, where geopolitics intertwines with theology. 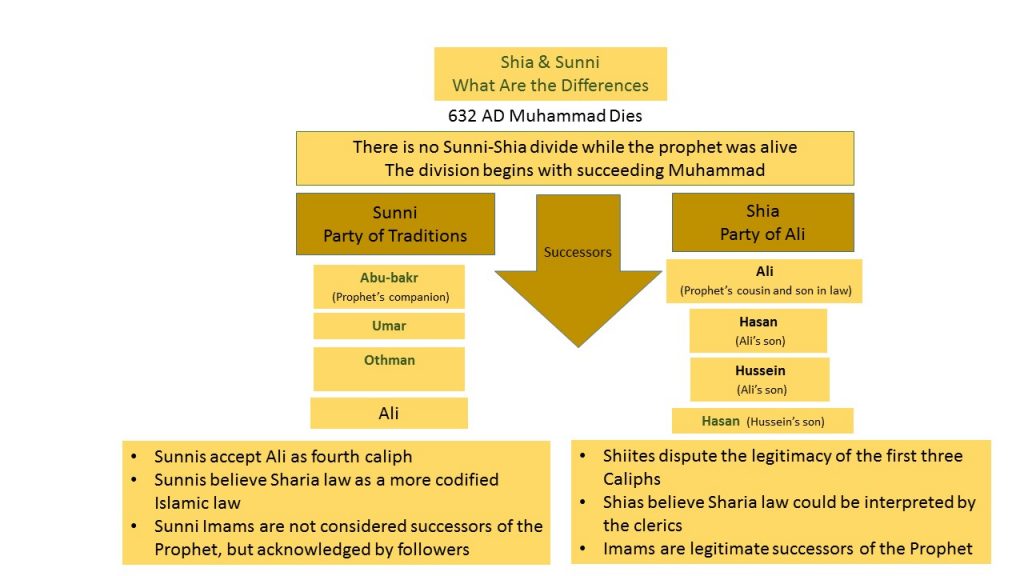 The divide started right after the death of Prophet Muhammad in 632. The dispute arose over who should lead the new faith.

Some believed that consensus must choose the new leader; others believed only the Prophet’s descendants should become the caliph. The leadership passed to Abu Bakr, a trusted companion of the Prophet. Some thought it should have been assigned to Ali who was the prophet’s cousin and son-in-law. Eventually, Ali became the Caliph after the assassination of Abu Bakr’s successors, Umar and Othman.

Ali was also assassinated in a mosque in Kufa (in today’s Iraq). His sons Hasan and then Hussein claimed the title. Hussein and many of his followers were massacred in Karbala, Iraq in 680. Hussein’s martyrdom turned into a core tenet to Ali followers. These followers became known as Shiites, a contraction of the phrase Shiat Ali, or Followers of Ali.

The Sunnis regard Ali and the three caliphs before him as actually guided and adherents to the Sunnah or the prophet’s tradition.

How do they differ in their beliefs?

The Sunni and Shiites are in agreement on many aspects of Islam. However, both branches encompass a broad spectrum of ideas and philosophies. Both include followers from secular to fundamentalists. Shiites consider Ali and his descendants as Imams, successors of the prophet. Most Shiites believe in a line of 12 Imams, the last of whom is thought to have vanished in the ninth century in Iraq. The Twelver Shiites expect his return as the Mahdi or Messiah.

Which sect is larger?

There were 1.6 billion Muslims in the world as of 2010 – roughly 23% of the global population – according to a Pew Research Center estimate. But while Islam is currently the world’s second-largest religion (after Christianity), it is the fastest growing major religion. Indeed, if current demographic trends continue, the number of Muslims is expected to exceed the number of Christians by the end of this century.(PEW Research)
Of the total Muslim population, 10-13% are Shia Muslims, and 87-90% are Sunni Muslims. Most Shias (between 68% and 80%) live in just four countries: Iran, Pakistan, India, and Iraq.

Although many countries in the Middle East-North Africa region, where the religion originated in the seventh century, are heavily Muslim, the region is home to only about 20% of the world’s Muslims. A majority of the Muslims globally (62%) live in the Asia-Pacific region, including large populations in Indonesia, India, Pakistan, Bangladesh, Iran and Turkey. 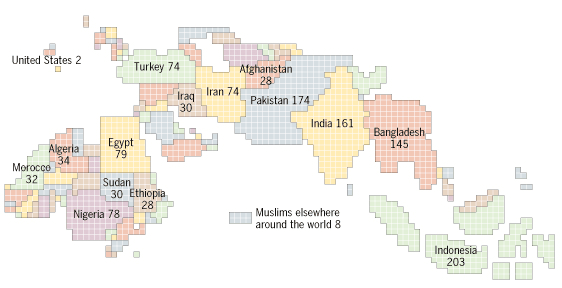 Indonesia is currently the country with the world’s single largest Muslim population, but Pew Research Center projects that  India will have that distinction by the year 2050 (while remaining a majority Hindu country), with more than 300 million Muslims.

The Muslim population in Europe also is growing; PEW Research projects 10% of all Europeans will be Muslims by 2050.