Last year, the Honorary Judging Committee of Sony World Photography on contemporary issues, selected Iranian photojournalist Asghar Khamseh as the recipient of its most coveted prize, the L’Iris d’Or Photographer of the Year. Chosen from the winners of the awards’ fourteen Professional categories, the winning work, ‘Fire of Hatred’, is a powerful portrait series tackling the social issues around the violent act of acid throwing.
Dominique Green, Chair, Documentary Jury said of the work: “Portraits of disfigurement resulting from social violence are undoubtedly a hard-hitting subject, and one which the longstanding tradition of documentary photography does not shy away from. 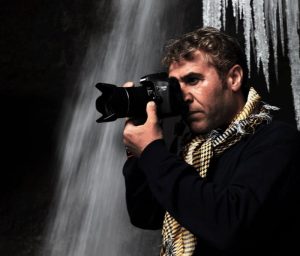 The power of Asghar Khamseh’s imposing series ‘Fire of Hatred’ is such that he enables the viewer to face head-on intimate images, which could be testing to examine closely, with empathy and respect which in turn allows the viewer to become a witness and not just a spectator. The Jury were united in their admiration of this work and the light it shed on the tragic practice it exposes.”
Asghar Khamseh was born in Tehran, Iran in 1963. From 2005, he began his professional career in photo journalism in 2005. He joined Mehr news agency in 2011. He has been particularly active in coverage of events related to human rights. His works have appeared in several group exhibitions in Iran.
Fire of Hatred
The violent act of acid throwing is primarily against women and children.  These attacks are committed with the intent to disfigure, maim and destroy the social life and future of the victim.  The motivation to commit this type of violence is cultural destitution, intolerance and happens in situations such as family conflicts, rejected marriage proposal, revenge and divorce requests. In addition physical and psychological damages, victims are faced with the experience of social stigma ,blame and social unpleasant tags. 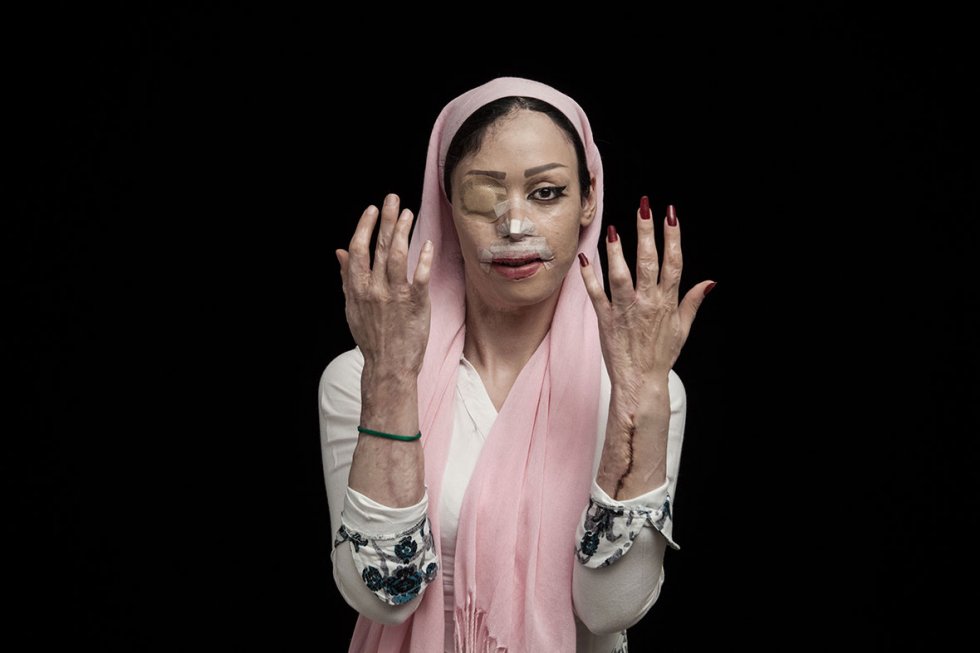 Shirin Mohamadi, 18-years-old from Tehran, said no to her suitor. He attacked her with acid on the first day of the new year in 2012. Shirin lost her right eye, nose and one of her ears. Her mouth was severely damaged and other parts of her body burned deeply.Asghar Khamseh/Sony World Photography Awards 2016 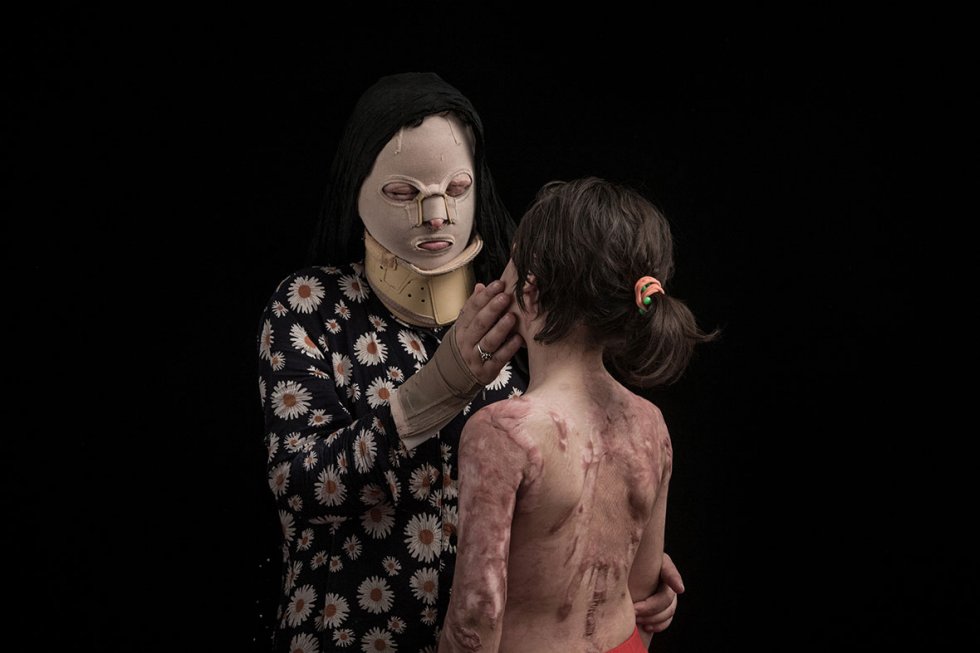 Raana Por Amrai, 38, and Fatemeh Qalandari, 8, are residents of Kohdasht in Khoram Abad, Iran. Raana’s brother-in-law thought Raana was responsible for his wife divorcing him. One day in July 2015, he threw acid at Raana and Fatemeh. This burnt Raana’s face, eyes, hands and parts of her neck and hurt Fatemeh’s scapula and hand. They have had numerous operations and are still in need of more.Asghar Khamseh/Sony World Photography Awards 2016 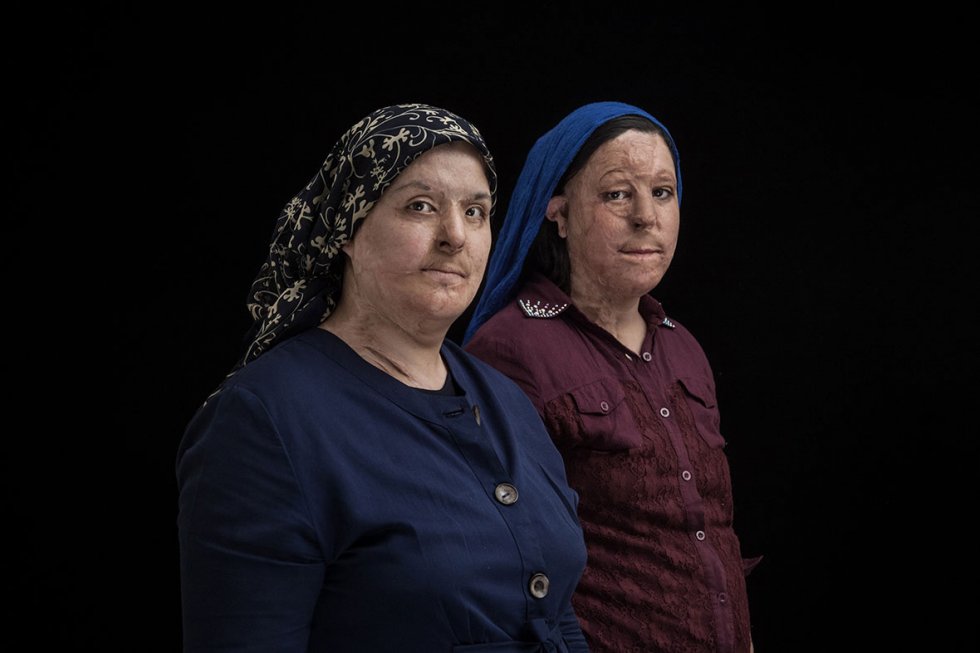 Maryam Zamani, 38, and Arezo Hashemi Nezhad, 13, from Tehran. In 2010 while Maryam were sleeping, her brother’s wife attacked her and her children with acid, apparently because of envy. Maryam and Arezo were disfigured and have had a lot of operations.Asghar Khamseh/Sony World Photography Awards 2016 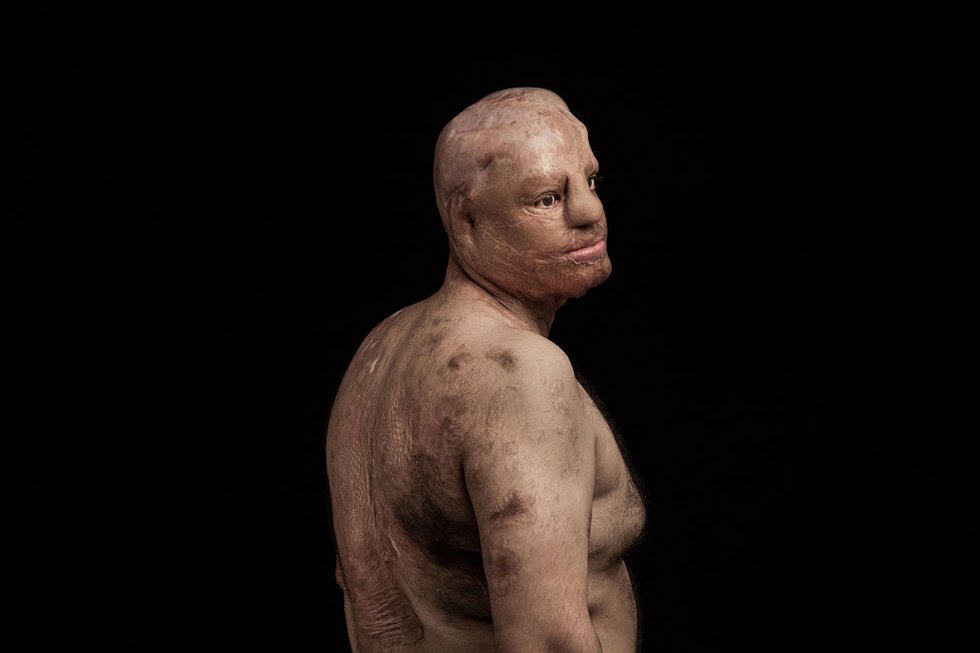 This is Mohsen Mortazavi, a 34-year-old resident of Tehran. On his first day at a new job in 2012, a co-worker threw three litres of sulphuric acid over him and knifed him 16 times, supposedly in revenge for making prank calls. Mohsen hadn’t made these calls, it was someone else. Mohsen lost his right eye, scalp and right ear. Asghar Khamseh/Sony World Photography Awards 2016 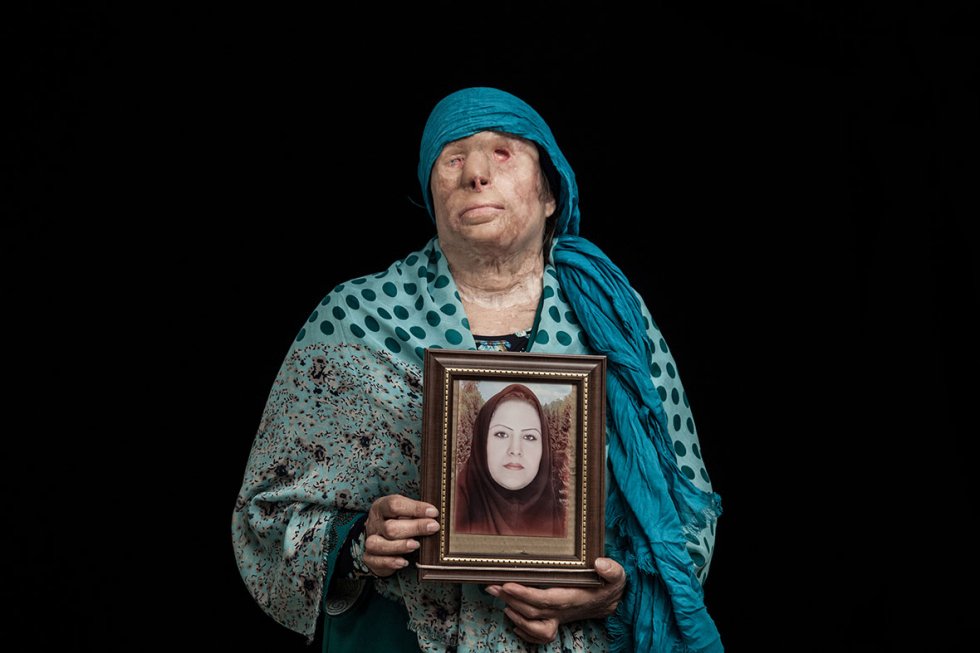 Zivar Parvin, a 37-year-old woman from Sarabeleh in western Iran, holds a photo of herself before an acid attack. Zivar was proposed to by her brother-in-law after her husband died, but she declined to marry him. On the night of 9 July 2011 he threw four litres of acid over Zivar and her 18-year-old daughter Yasra while they were sleeping.The attack occurred just a week prior to Yasra’s wedding ceremony. Eighteen days after the acid attack, Yasra died. Zivar lost her beauty and her left eye completely. She can only see weak light with her right eye. She has had a lot of operations and still needs to have more. Asghar Khamseh/Sony World Photography Awards 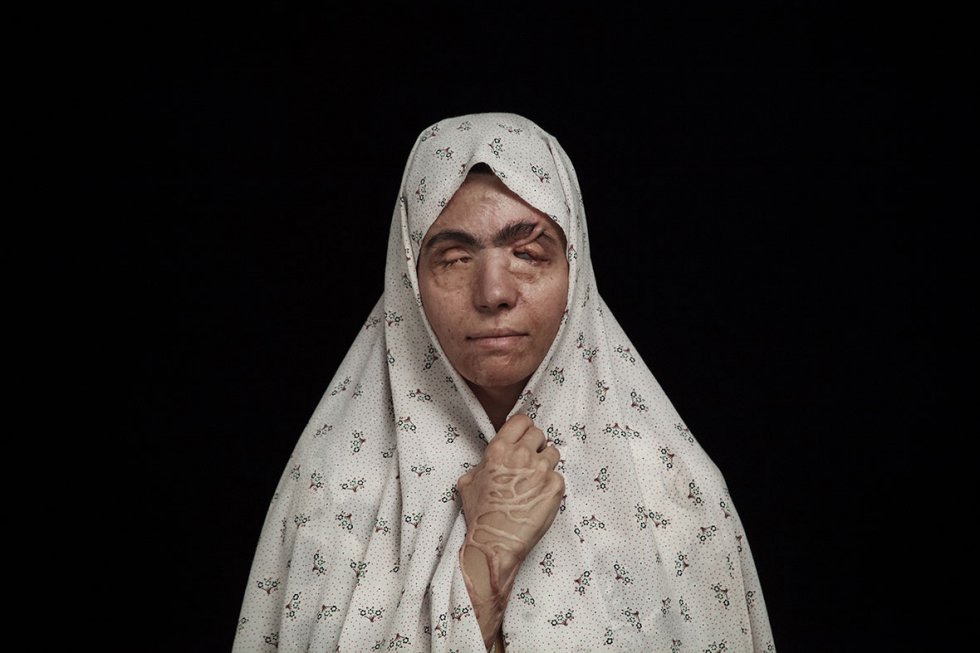 Masoumeh Atai is a 32-year-old resident of Esfahan province in Iran, with one child. In 2008, she divorced her husband. Two years later she was attacked with acid by her former father-in-law. The reason for the acid throwing was that Masoumeh disagreed with her father-in-law that she should reconcile with her ex-husband. Masoumeh lost her beauty and her sight. She has had a lot of surgery and still needs more. Asghar Khamseh/Sony World Photography Awards 2016 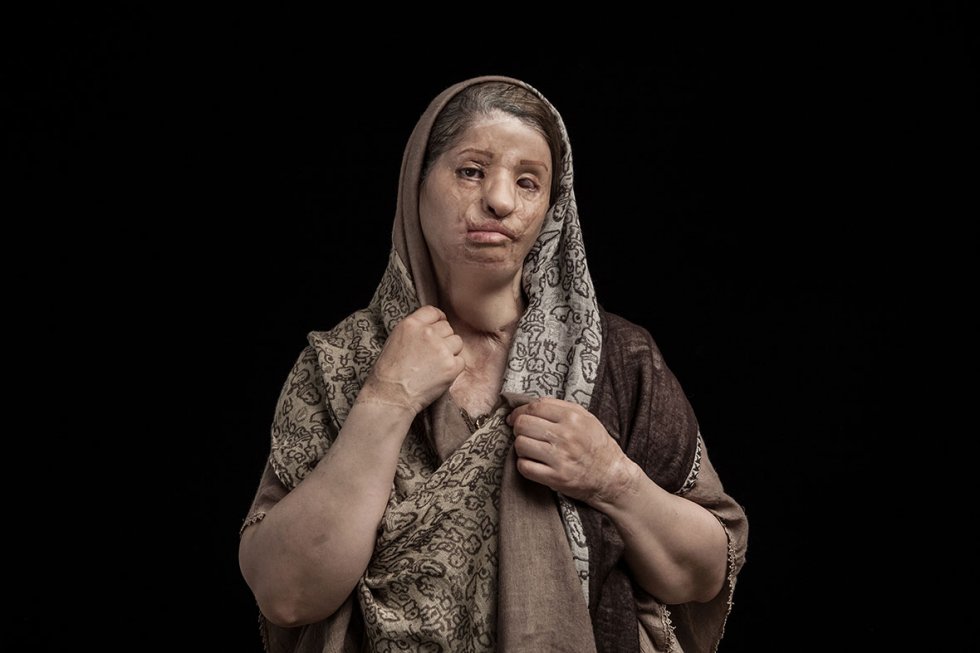 Mahnaz Kazemi, age 39, from Qom Province in Iran, was regularly beaten and harmed by her husband. She decided to divorce him, but when her husband found out on 13 July 2007, he attacked her with acid. Mahnaz lost her beauty, left eye and one ear completely. She has had a lot of operations and still needs to have more. Asghar Khamseh/Sony World Photography Awards 2016 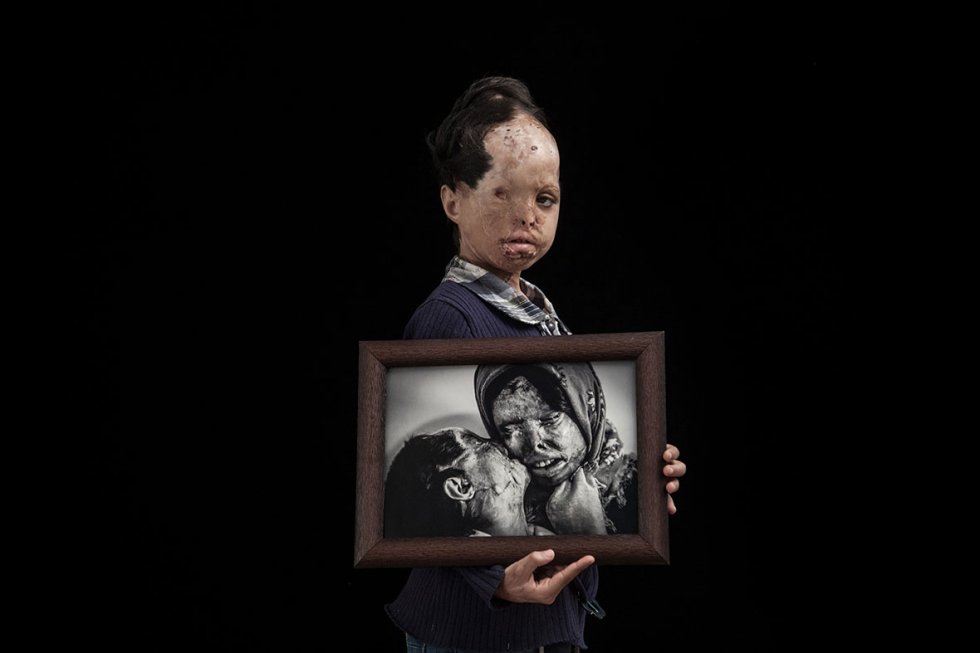 Somayeh Mehri was a 29-year-old resident of Bam in southern Iran. She decided to divorce her husband because of his addictions and because of his harassment and persecution. In June 2011 he threw acid at her face and body and her daughters. Somayeh lost both eyes and was burned horrendously. Three-year-old Raana lost her right eye. Six-year-old Nazanin was also was burnt. Somayeh suffered pain and operations for four years, but in April 2015 she died in a hospital in Tehran. (Her daughter Raana’s holds a photo of the two of them) . Asghar Khamseh/Sony World Photography Awards 2016