Ice Dream’s Wish: A Memorable Tale of Love and Care

With references made to today’s technology and its power, “Ice Dream’s Wish “ is a modern fairy tale

Illustrations by Mehri Dadgar enhance and add depth to the story in a way that words leap off the page. Her illustrations make the book verbally and visually appealing and more attuned to the child’s imagination.

With references made to today’s technology and its power, “Ice Dream’s Wish “ is a modern fairy tale that may not seem clearly real, as fairy tales are not. Nonetheless, the world Nasrin Motahedeh has created is truer than reality and, unlike the wizardly world of Rowling’s “ Harry Potter” series, has roots in every day significant events of life. Adult readers of the older generation, especially Iranians, may have to follow the advice of British poet Samuel Taylor Coleridge to suspend disbelief to enjoy the story that brings back to us the memories of a different era and world of our childhood.

On a snowy winter day, three children made a snowman, named “Ice Dream.” But they soon found out that it looked no different than other snowmen. After a long talk and a long search on their computers, they finally discovered three beautiful gifts that would make their newly made snowman extra special. Each child gave him a gift: a pair of sparkling marbles for eyes, a rosebud for a heart, and a yellow apple for a brain. Thus the snowman was granted a life of his own, but he was stuck in one spot and couldn’t move.

Ice Dream, on one of his lonely days, thought to himself that it wasn’t fair that he was stuck in one spot and couldn’t move around. Ice Dream wished he could follow children footsteps and visit them when they leave him for school. Although we do not expect his wish to be fulfilled, the writer magically brings him to life by a kind angel made of fluffy clouds and the Ice Dream’s Wish comes true.

On his way to school to see his friends, the children, Ice Dream meets different needy animals and people. He generously offers each of his belongings to each one of them.

By the time the snowman made it to the schoolyard, he was so caught in the whirling snow that eventually, he no longer looked the same.

The three children on the way going home noticed that something unexpected had happened to the snowman and their gifts were also magically transformed. Affected by the changes:

“Their surprised eyes sparkled so kindly.

Their beating hearts were touched by love.

And their smart brains shone with care.”

The children decided to make their snowman with fresh snow once again. Next day, the snowman was reborn. On going back to school, the children, to their amazement, saw “Their snowman was smiling at the only piece of cloud in the whole blue sky, a cloud shaped very much like an angel!” 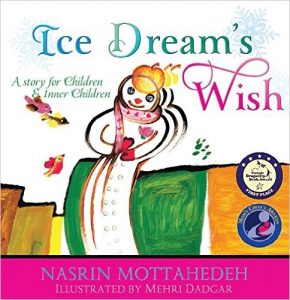 Like in any fairy tale, and as the title implies, the attitude is wouldn’t be nicer if we could have a better, safer world to live in with a kinder, loving, and caring people? Nasrin Motahedeh has created a memorable character out of a snowman. Snowman is more loving, caring and human than many real people who have no compassion for themselves and those around them, especially those who live in some societies where human virtues, conditions, and relations have no value. Money is the only index of success and greed is the criterion for life achievement.

“Ice Dream’s Wish” is mystical and inspirational. I loved it. When I finished reading the story, it left me with the glorious feeling of joy, hope, and happiness.

One Response to Ice Dream’s Wish: A Memorable Tale of Love and Care